The winners of the fourth and the eleventh edition, Amaranthe.

Thirty-four songs have won the North Vision Song Contest, a competition organized by members of the North Broadcasting Union. The contest has been held once in about one or two months since its debut in April 2013. The contest's winner has been determined using a basic voting method; awarding points to countries by juries and/or televoters. The country awarded the most points is declared the winner.

There have been thirty-four contests. Denmark, Norway, Sweden and Switzerland have won the event three times while Israel, Italy and Ukraine have won the contest twice. The other seventeen countries have won once. Iceland won the first contest, held in Hungary. Apart from Iceland, Lebanon is the only country to win at its debut.

The winners of the contest have mostly been female solo performers apart from the winners of the second, fourth, tenth, eleventh, thirteenth, fourteenth, fifteenth, twenty-third, twenty-fifth, twenty-seventh, thirtieth, thirty-third and thirty-fifth editions. In the tenth edition, a duet won for the first time. In the twenty-fifth edition, a male-only act won for the first time. Amaranthe became the first artist to win the contest twice. 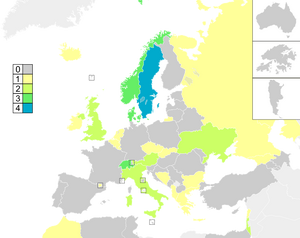 Map showing each country's number of North Vision wins up to the thirty-fifth edition.