The winner of the edition was Iceland with the song "In the Silence" performed by Greta Salome, which scored 170 points, eleven points over the runner-up, Denmark. The top 5 also included the big 3 members, Hungary and Sweden with the third and fourth places respectively. Estonia finished on the fifth place. Norway was the only Nordic country that wasn't in the top 5, apart from Finland which failed to qualify.

Budapest is the capital and the largest city of Hungary, the largest in East-Central Europe and the seventh largest in the European Union. It is the country's principal political, cultural, commercial, industrial, and transportation centre, sometimes described as the primate city of Hungary. In 2011, according to the census, Budapest had 1.74 million inhabitants, down from its 1989 peak of 2.1 million due to suburbanization. The Budapest Commuter Area is home to 3.3 million people. The city covers an area of within the city limits. Budapest became a single city occupying both banks of the river Danube with a unification on 17 November 1873 of west-bank Buda and Óbuda with east-bank Pest.

The history of Budapest began with Aquincum, originally a Celtic settlement that became the Roman capital of Lower Pannonia. Hungarians arrived in the territory in the 9th century. Their first settlement was pillaged by the Mongols in 1241-42. The re-established town became one of the centres of Renaissance humanist culture in the 15th century. Following the Battle of Mohács and nearly 150 years of Ottoman rule, the region entered a new age of prosperity in the 18th and 19th centuries, and Budapest became a global city after the 1873 unification. It also became the second capital of the Austro-Hungarian Empire, a great power that dissolved in 1918, following World War I. Budapest was the focal point of the Hungarian Revolution of 1848, the Hungarian Republic of Councils of 1919, Operation Panzerfaust in 1944, the Battle of Budapest in 1945, and the Revolution of 1956. 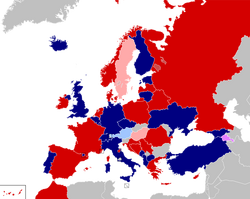 Nineteen countries participated in the first semi-final. Hungary and Sweden also voted in this semi-final. The highlighted countries qualified for the final.

Nineteen countries participated in the second semi-final. Austria also voted in this semi-final. The highlighted countries qualified for the final.

Twenty-three countries participated in the final, with all forty-one participating countries eligible to vote. Armenia, who was set to debut in the second edition, was allowed to vote in the final.

Retrieved from "https://nvsc.fandom.com/wiki/North_Vision_Song_Contest_1?oldid=61585"
Community content is available under CC-BY-SA unless otherwise noted.