North Vision Song Contest 10, often referred to as NVSC 10 was the 10th edition of the North Vision Song Contest. It was held in Bergen, Norway, following Alida's victory in the ninth edition. It was the second time in a row that Norway hosted the contest which marked the first time that a country hosts twice. Norsk rikskringkasting (NRK) chose the Bergenshallen located in Bergen to host the edition. Tone Damli and Markus Foss served as the presenters for the show.

Fifty-one countries participated in the edition, among them the debutant Faroe Islands. The edition saw the return of eight countries; Armenia, Azerbaijan, Belgium and San Marino returned to the contest after the one-edition break while Croatia, Georgia, Montenegro and Morocco were able to return to the contest after they were banned for one edition due to severe cheating. Albania and Iceland announced their withdrawal from the contest due to financial issues while Spain withdrew due to being in the pre-qualification round of the edition.

The winner of the edition was Ukraine with the song "Zerkala" performed by Ani Lorak and Grigory Leps which gathered 163 points. It was the first time that Ukraine won the contest. It is also the first time that a duo won the contest and the second time that a non-English song wins the contest. Turkey finished as the runner-up, 8 points behind the winner while Andorra finished third for second time after the third edition. Moldova and Montenegro, who finished fourth and fifth respectively, achieved their first top 5. From the big 5, only Ukraine and the United Kingdom achieved a top 10 place with the first achieving their fifth top 5 result in a row, making it the only country to achieve this so far.

Bergen is a city and municipality in Hordaland on the west coast of Norway, on the peninsula of Bergenshalvøyen. The city was established before 1070 AD. Bergen is the administrative centre of Hordaland.

As of 2014 the municipal population was 274,500 making it the second-most populous city in Norway (The Greater Bergen Region population is 406,800). The area covered by the municipality is 465 square kilometres (180 sq mi), and it consists of eight boroughs.

The remains of the quays, Bryggen, is a World Heritage Site. The city is an international centre for aquaculture, shipping, offshore petroleum industry and subsea technology, and a national centre for higher education, tourism and finance. Natives speak the distinct Bergensk dialect. The city features Bergen Airport, Flesland, the Bergen Light Rail and is the terminus of the Bergen Line; Bergen Port is Norway's busiest.

The city centre and northern neighbourhoods are located on the shoreline of Byfjorden. Bergen is known as the city of The Seven Mountains. 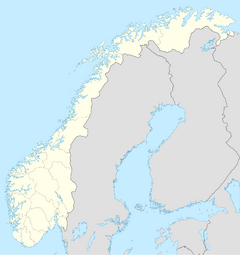 Bergen
Locations of the candidate cities. The chosen location is marked in red.

Unlike in the previous edition, NRK decided that the host city would be selected through a bidding phase. Right after Norway won the ninth edition, cities were able to joint the race for hosting the upcoming edition. On 7 August 2014, the cities that applied to be in the bidding phase were revealed.

The previous host city and capital of the country, Oslo, revealed that there is no interest in hosting the contest again. There were four applied venues, among them the Vikingskipet (Viking Ship), located in Hamar which was the largest venue that applied to host the contest with a capacity of 20,000. Bergen joined the phase with two venues: the Bergenshallen with a capacity of 5,600 and the Sotra Arena with a capacity of 3,000. The fourth and last venue that had applied was Nordlandshallen in Bodø which can hold up to 5,500 spectators.

The host city was announced on 9 June 2014; Bergen with the Bergenshallen were selected by the Norwegian broadcaster in order to serve as the host venue for the three events of the edition. The head of NRK reportedly said: "We're going back to a smaller venue. We think that the show will be great anyway". It was also reported that the arena's capacity would be enlarged and instead of 5,600, the venue will most likely hold up to 9,000 to 11,000.

The draw that determined the semi-final allocation was held on 20 August 2014 at the Radisson Blu Hotel Norge in Bergen. As the pre-qualification round would start after the draw, the spots for the pre-qualification round qualifiers were drawn first. The big 5 countries were first drawn to determine in which semi-final would each country vote. The Netherlands and the United Kingdom were drawn to vote in the first semi-final while Norway, Russia and Ukraine were drawn to vote in the second semi-final. The rest of the forty countries were divided into six pots, based on their geographical place. Each time a country was drawn from the pot, its semi-final and half of the semi-final was determined. 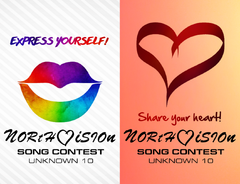 The two proposed logos. The idea of the second was later developed into the used logo.

The logo for the tenth edition of the North Vision Song Contest was designed by Daniel Lengfeld. The first proposed logo's idea was developed around the theme Express Yourself. The logo contained a lip which combined the colors of the rainbow. However, the first logo was rejected after discussions.

The colors of the second proposed logo (red, light-red) were chosen to resemble the warmth of being together. The actual slogan for the contest was Share your heart! but was later changed to Feel the passion! after the logo had been discussed once again. Other suggestions were discussed too but not used. In the beginning phase, the logo contained a heart made out of ribbon. It was changed to an ornament heart with a special pattern in dark red colours. 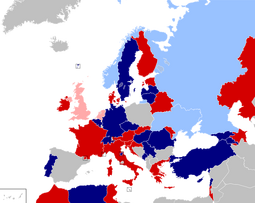 Fifty-one countries participated in the tenth edition with eight countries returning to the contest, including the the countries that were disqualified from the ninth edition; Croatia, Georgia, Montenegro and Morocco. Armenia, Azerbaijan, Belgium and San Marino announced their returns after the one-edition break.

After not making a debut in the ninth edition due to financial issues, the Faroe Islands confirmed that they would be debuting in the tenth edition. Albania and Iceland announced their withdrawals, both due to financial issues while Spain decided to pull out from the contest due to being part of the pre-qualification round of the edition. The HoD of FYR Macedonia confirmed that there is still no interest in participating. However, it was also revealed that due to HoD changes, the country is expected to return for the eleventh edition.

Nine countries participated in the second pre-qualification round. Ireland, Israel and Lithuania qualified to the semi-finals while Bosnia and Herzegovina, Bulgaria, Luxembourg, Malta, Monaco and Poland were eliminated.

Twenty countries participated in the second semi-final. Norway, Russia and Ukraine also voted in this semi-final. The highlighted countries qualified for the final.

Twenty-five countries participated in the final, with all forty-five participating countries eligible to vote.

On 25 July 2014, BNT confirmed that Bulgaria would not be competing in the edition due to disputes with the NBU and lack of interest. However, on 4 August 2014, the Bulgarian broadcaster reinstated their participation, as they had finally found a sponsorship to fund an entry and a national selection.

On the 31st of July, Luxembourg confirmed its participation along with a singer. It announced that Hadise would represent the country. However, the entry was rejected immediately by the NBU council. The country selected previous participant Lara Fabian and Mustafa Ceceli to represent them instead.

After the second semi-final of the ninth edition, from which Poland failed to qualify to the final, Polish broadcaster TVP announced that their ongoing national selection would be cancelled due to yet unknown circumstances.

During this edition, the jubilee awards were held to celebrate the ten editions of the contest. The public could vote through the website. The winners of each category were revealed during the semi-finals and the final of the edition.

The third OGAN Second Chance Contest took place for this edition and was hosted by OGAN Sweden. The OGAN clubs of each country could submit one of their national selection entries to compete in the contest with some rules applying for the entries. The United Kingdom won the contest with Neon Jungle and their song "Louder".

Countries that are active members of the North Broadcasting Union (NBU), are also eligible to participate in the North Vision Song Contest. As in every edition, an invitation to all the members had been sent in order to confirm whether they will participate or not. Fifty one countries confirmed their participation in the edition. The following list of countries declined stating their reasons as shown below.

Retrieved from "https://nvsc.fandom.com/wiki/North_Vision_Song_Contest_10?oldid=48600"
Community content is available under CC-BY-SA unless otherwise noted.