North Vision Song Contest 11, often referred to as NVSC 11 was the 11th edition of the North Vision Song Contest. It took place in Lviv, Ukraine following the country's victory in the tenth edition. It was the first time that Ukraine hosted the contest. Following a bidding phase, NTU chose the Lviv Arena in Lviv as the host venue with Zlata Ognevich serving as the presenter.

Fifty-two countries participated in the edition with Albania, FYR Macedonia and Iceland returning to the contest. Belgium and Slovenia announced their withdrawal from the edition. Although Spain had confirmed their return, it was later decided that they would not return in this edition due to a controversy concerning its Head of Delegation.

The winner of the edition was Denmark with the song "Drop Dead Cynical" performed by the winners of the fourth edition, Amaranthe, making Denmark the second country to win twice. It was also the first time that an artist wins twice. France finished as a runner-up for the fourth time with just 3 points less than the winner. Poland and Andorra finished fourth and fifth respectively. Although Ukraine and Croatia were tied for the fifth place, due to the tie-breaking rules, Ukraine finished fifth and Croatia finished sixth with the first achieving their sixth top 5 result in a row. Two of the big 5 members finished in the top 5 again (Ukraine and Andorra) while the rest of the big 5 finished in the bottom 6.

Lviv is a city in western Ukraine that was once a major population centre of the Halych-Volyn Principality, the Crown of the Kingdom of Poland, the Habsburg Kingdom of Galicia and Lodomeria, and later the capital of Lwów Voivodeship during the Second Polish Republic.

Formerly capital of the historical region of Galicia, Lviv is now regarded as one of the main cultural centres of today's Ukraine. The historical heart of Lviv with its old buildings and cobblestone streets has survived Soviet and Nazi occupation during World War II largely unscathed. The city has many industries and institutions of higher education such as Lviv University and Lviv Polytechnic. Lviv is also a home to many world-class cultural institutions, including a philharmonic orchestra and the famous Lviv Theatre of Opera and Ballet. The historic city centre is on the UNESCO World Heritage List. Lviv celebrated its 750th anniversary with a son et lumière in the city centre in September 2006.

The draw that determined the semi-final allocation was held on 25 October 2014 at the Nobilis hotel in Lviv. As the pre-qualification round would start after the draw, the spots for the pre-qualification round qualifiers were drawn first. The big 5 countries were first drawn to determine in which semi-final would each country vote. Andorra, Turkey and Ukraine were drawn to vote in the first semi-final while Moldova and Montenegro were drawn to vote in the second semi-final. The rest of the thirty-nine countries were divided into six pots, based on their geographical place. Each time a country was drawn from the pot, its semi-final and half of the semi-final was determined. 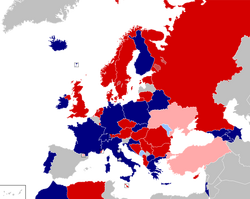 Both Belgium, Slovenia and Spain were revealed to not be participating in the edition; Belgium cited financial issues as their withdrawing reason while Slovenia was forced to withdraw due to missing the confirmation deadline. Spain had originally confirmed their return to the contest. However, it was later revealed that due to a controversy concerning the Spanish Head of Delegation, the country would not return to the contest.

The edition saw the highest amount of returning acts; among them, the former-winners Amaranthe.

Former winner, Amaranthe returned to represent Denmark making them the third winner to return after their victory following Malena Ernman and TinkaBelle. For Moldova, which was part of the Big 5, Angelika Vee returned for the third time after the fourth and the eighth edition. Claudia Faniello returned to represent Malta for the second time after participating in the tenth edition. Czech music duo Verona returned to the contest after previously participating in the first edition. Janet Devlin, who represented Ireland at the fifth edition, made a return to the contest for a second time.

After previously participating as part of the band La Quinta Estación in the eighth edition, Natalia Jiménez made her solo debut at the contest where she once again represented Andorra. Zhanar Dugalova, who previously represented Kazakhstan at the seventh edition as a part of KeshYOU also returned, making her solo debut. Winner of the tenth edition, Ani Lorak, returned to represent Ukraine, this time as a solo act. Silva Hakobyan, who participated in the PQR for the eight edition, also represented Armenia again this time.

Eight countries participated in the third pre-qualification round. Austria. Cyprus and Liechtenstein qualifed to the semi-finals, while Kazakhstan, Latvia, Lebanon, San Marino and Tunisia were eliminated.

Twenty-one countries participated in the first semi-final. Andorra, Turkey and Ukraine also voted in this semi-final. The highlighted countries qualified for the final.

Twenty-one countries participated in the second semi-final. Moldova and Montenegro also voted in this semi-final. The highlighted countries qualified for the final.

A poll was opened during the final of the edition with all the finalists. The public could vote for their favorite songs and there was no limit in choices. However, only one vote per user was allowed. The top 5 of the poll was presented during the final voting.

The North Vision Awards returned to this edition after not being held in the ninth and tenth edition. The nominees were revealed on 20 December 2014 and the voting started the same day. The winners were revealed on 4 January 2015.

The fourth OGAN Second Chance Contest took place for this edition and was hosted by OGAN Norway. The OGAN clubs of each country could submit one of their national selection entries to compete in the contest with some rules applying for the entries. Norway won the contest with Two Steps from Hell and Merethe Soltvedt and their song "Compass".

Countries that are active members of the North Broadcasting Union (NBU), are also eligible to participate in the North Vision Song Contest. As in every edition, an invitation to all the members have been sent in order to confirm whether they will participate or not. Fifty-two countries confirmed their participation in the edition. The following list of countries declined stating their reasons as shown below.

Retrieved from "https://nvsc.fandom.com/wiki/North_Vision_Song_Contest_11?oldid=51021"
Community content is available under CC-BY-SA unless otherwise noted.