North Vision Song Contest 13, often referred to as NVSC 13 was the 13th edition of the North Vision Song Contest. Following the win of Kokoro in the previous edition, this edition was hosted in Tel Aviv, Israel. IBA chose the Menora Mivtachim Arena in Tel Aviv to host the edition while Mei Finegold was selected as the only presenter of the contest for both Semi-finals and Grand Final.

Fifty-three countries participated in the edition with Algeria, Czech Republic, Estonia, Faroe Islands, Montenegro and San Marino returning to the contest after withdrawing the last edition. Slovenia returned after two editions break. There were two withdrawing countries from the edition: Lithuania and Portugal didn't take part due to lack of interest.

The winner of the edition was Kazakhstan with the song "Falling For You" performed by A-Studio and Danish singer Tomas which gathered 236 points breaking the record of the most points. Sweden finished as runner-up with 9 points difference from the first place. Germany, Luxembourg and Croatia came third, fourth and fifth respectively making their best result back then. Switzerland got the sixth place remaining in the Big 5 which became Big 6 from the next edition.

Tel Aviv (Hebrew: תֵּל־אָבִיב, Arabic: تل أبيب‎) or Tel Aviv-Yafo, is the second most populous city in Israel, behind Jerusalem, with a population of 414,600. Tel Aviv forms part of the Tel Aviv Metropolitan Area, also known as Gush Dan, which constitutes Israel's largest metropolitan area so as to house 3,464,100 residents, 42% of the country's population. Tel Aviv-Yafo is the largest and most populous section of the metropolitan area.

The city is located on the Mediterranean coast in central-west Israel and is governed by the Tel Aviv-Yafo municipality, headed by Ron Huldai. Tel Aviv is home to many foreign embassies. Residents of Tel Aviv are referred to as Tel Avivim or by the singulars: Tel Avivi (for males) and Tel Avivit (for females).

Tel Aviv was founded by the Jewish community on the outskirts of the ancient port city of Jaffa (Hebrew: יָפוֹ Yafo) in 1909. Immigration by mostly Jewish refugees meant that the growth of Tel Aviv soon outpaced Jaffa's, which had a majority Arab population at the time. Tel Aviv and Jaffa were merged into a single municipality in 1950, two years after the establishment of the State of Israel. Tel Aviv's White City, designated a UNESCO World Heritage Site in 2003, comprises the world's largest concentration of Bauhaus buildings.

Tel Aviv is a global city, a technological and economic hub, home to the Tel Aviv Stock Exchange, corporate offices and research and development centers. It is the country's financial capital and a major performing arts and business center. Tel Aviv has the second-largest economy in the Middle East after Dubai, and is the 31st most expensive city in the world. With 2.5 million international visitors annually, Tel Aviv is the fifth-most-visited city in the Middle East. Known as "The City that Never Sleeps" and a "party capital", it has a lively nightlife, dynamic atmosphere and a famous 24-hour culture.

The draw that determined the semi-final allocation was held on 28 February 2015. As the pre-qualification round would start later than the draw, the spot for the pre-qualification round qualifier was drawn first. The big 5 countries were first drawn to determine in which semi-final each would country vote. Finland, Norway and Slovakia were drawn to vote in the first semi-final while Israel and Switzerland were drawn to vote in the second semi-final. The rest of the forty-one countries were divided into six pots, based on their geographical place. Each time a country was drawn from the pot, its semi-final and half of the semi-final was determined. 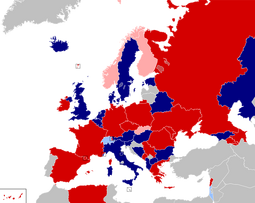 Seven countries participated in the fifth pre-qualification round. Croatia qualifed to the semi-finals, while Cyprus, Latvia, Malta, Morocco, Tunisia, Turkey were eliminated.

Twenty-one countries participated in the first semi-final. Finland, Norway and Slovakia also voted in this semi-final. The highlighted countries qualified for the final.

Twenty-one countries participated in the second semi-final. Israel and Switzerland also voted in this semi-final. The highlighted countries qualified for the final.

Twenty-five countries competed in the final, with all fifty-three participating countries eligible to vote.

The seventh ceremony was held for the thirteenth edition of the contest. The ceremony took place in Helsinki, Finland, the runner up of the twelfth edition. The nominees were revealed on 26 April 2015 and the voting started the same day. The winners were revealed on 14 May 2015.

The sixth OGAN Second Chance Contest took place for this edition and was hosted by OGAN Armenia. The OGAN clubs of each country could submit one of their national selection entries to compete in the contest with some rules applying for the entries. Armenia won the contest with Lilit Hovhannisyan and her song "Requiem".

Countries that are active members of the North Broadcasting Union (NBU), are also eligible to participate in the North Vision Song Contest. As in every edition, an invitation to all the members have been sent in order to confirm whether they will participate or not. Fifty-three countries confirmed their participation in the edition. The following list of countries declined stating their reasons as shown below.

Retrieved from "https://nvsc.fandom.com/wiki/North_Vision_Song_Contest_13?oldid=51787"
Community content is available under CC-BY-SA unless otherwise noted.