North Vision Song Contest 14, often referred to as NVSC 14, was the 14th edition of the North Vision Song Contest. It was held in Astana, Kazakhstan following the country's win of the previous edition. NTK chose the Astana Arena in Astana to host the edition while Zhanar Dugalova was selected as the only presenter of the contest for both Semi-finals and Grand Final.

Fifty countries participated in the edition with Lithuania and Portugal returning to the contest after withdrawing the last edition. Five countries withdrew from this edition; Bulgaria and Romania announced cuts in the budget and low interest while San Marino didn't state any reasons for its withdrawing. TVE announced Spain's withdrawal for various reasons, the biggest being the participation in the PQR. TRM announced that Moldova would take one edition break due to luck of fairness in the contest.

Denmark was declared the winner for the third time with the song "My Crown" by The Storm which managed to win the edition with 249 points, 60 points over the runner-up Lebanon. During this edition, the country broke several records: the song managed to achieve the highest number of points in both a final and a semi-final and also managed to win with the largest margin ahead the runner-up. It also became the first PQR qualifier to win the contest. United Kingdom and Norway had another top five placement with the third and fourth places respectively. Russia finished fifth while Croatia sixth with the last being the only member of the big 6 to end in the top ten.

Astana is the capital of Kazakhstan. It is located on the Ishim River in the north portion of Kazakhstan, within Akmola Region, though administrated separately from the region as the city with special status. The 2014 census reported a population of 835,153 within the city, making it the second-largest city in Kazakhstan.

Founded in 1830 as the settlement of Akmoly (Russian: Акмолы), it served as fortification of the Siberian Cossacks. In 1932, the settlement was granted a town status and renamed Akmolinsk (Russian: Акмолинск). On 20 March 1961, the city was renamed to Tselinograd (Russian: Целиноград) to mark the city's evolution a cultural and administrative center of the Virgin Lands Campaign. In 1992, it was renamed Akmola (Kazakh: Ақмола), the modified original name meaning "a white grave". On 10 December 1997, Akmola replaced Almaty to become the capital of Kazakhstan. On 6 May 1998, it was renamed Astana, which means "the capital" in Kazakh.

Astana is a planned city, such as Canberra in Australia, Washington, D.C. in the United States and Brasilia in Brazil. The master plan of Astana was designed by Japanese architect Kisho Kurokawa. As the seat of the Government of Kazakhstan, Astana is the site of the Parliament House, the Supreme Court, the Ak Orda Presidential Palace and numerous government departments and agencies. It is home to many futuristic buildings, hotels and skyscrapers. Astana is center for sport, healthcare and education. Astana will host the Expo 2017.

The Astana Arena (Kazakh: Астана Арена) is a football stadium in Astana, Kazakhstan. The stadium holds 30,000 and has a retractable roof. It serves as the national stadium for the Kazakhstan national football team. Astana Arena is the second largest stadium in the country and it was built from 2006 to 2009 at a cost of $185 million, and was officially opened on July 3, 2009. It is also a home ground for FC Astana of the Kazakhstan Premier League and FC Bayterek of the Kazakhstan First Division. The stadium hosted the opening ceremony of the 7th Asian Winter Games on January 31, 2011. Astana Arena is one of the venues to bid to host Euro 2020 matches 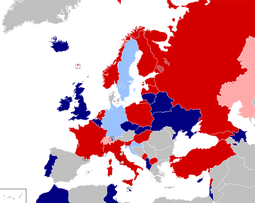 Fifty countries participated in the edition. Lithuania and Portugal returned after taking a break from the last edition.

Five countries announced their withdrawals: Bulgaria and Romania due to lack of budget and interest. TRM confirmed that Moldova would not continue its participation due to a lack of fairness in the contest. Spain withdrew for various reasons, the biggest being the participation in the Pre-qualification round. San Marino withdrew once again after the last place in the semi-final.

Seven countries participated in the sixth pre-qualification round. Bosnia and Herzegovina, Denmark and Serbia qualified to the semi-finals while Algeria, Armenia, Austria and Greece were eliminated.

Twenty countries participated in the first semi-final. Kazakhstan, Luxembourg and Switzerland also voted in this semi-final. The highlighted countries qualified for the final.

Twenty countries participated in the second semi-final. Croatia, Germany and Sweden also voted in this semi-final. The highlighted countries qualified for the final.

Twenty-six countries participated in the final, with all fifty participating countries eligible to vote.

A poll was opened during the final of the edition with all the finalists. The public could vote for their favorite songs and there was no limit in choices. However, only one vote per user was allowed. The winner and the top 5 of the poll was presented before the final voting.

The eighth ceremony of the North Vision Awards was held for this edition. The ceremony took place in Gothenburg, Sweden, the runner up of the thirteenth edition. The nominees were revealed on 29 June 2015 and the voting started the same day. The winners were revealed a week later, on 6 July 2015.

The seventh OGAN Second Chance Contest took place for this edition and was hosted by OGAN Armenia. The OGAN clubs of each country could submit one of their national selection entries to compete in the contest with some rules applying for the entries. Italy won the contest as the Rest of the World with Chiara and her song "Straordinario".

Countries that are active members of the North Broadcasting Union (NBU), are also eligible to participate in the North Vision Song Contest. As in every edition, an invitation to all the members have been sent in order to confirm whether they will participate or not. Fifty countries confirmed their participation in the edition. The following list of countries declined stating their reasons as shown below.

Retrieved from "https://nvsc.fandom.com/wiki/North_Vision_Song_Contest_14?oldid=51001"
Community content is available under CC-BY-SA unless otherwise noted.