North Vision Song Contest 15, often referred to as NVSC 15 was the 15th edition of the North Vision Song Contest. It was held in Copenhagen, Denmark. The country was hosting the show for the third time, after The Storm won the fourteenth edition with their song "My Crown". For the first time since the ninth edition, there was no pre-qualifying round. DR chose the Parken Stadium in Copenhagen to host the three shows of the edition with Ulla Essendrop and Louise Wolff serving as the presenters while the Danish representative in the tenth edition Tim Schou served as the green room host.

Forty-six countries participated in the edition, the lowest number of participants since the ninth edition. Seven countries announced their withdrawal from the competition: Albania, Austria, Azerbaijan, Cyprus, Lithuania, Morocco and Poland. Spain announced that they would return after one edition break, but withdrew their confirmation later. Bulgaria, Moldova and Romania returned after withdrawing from last edition.

Israel was declared as the winner of the edition, marking the second victory of the country with the first being also in an edition hosted by Denmark. The country won with the song "All of It But Me" by The Young Professionals and Anna F. which got 197 points, 41 points over the runner-up Italy. Algeria came in third, achieving their first top 6 result. Sweden and Denmark came fourth and fifth respectively with the latter being the only big 6 to finish in the top 6 again along with Russia on the sixth place.

Copenhagen is the capital and most populated city of Denmark, with an urban population of 1,263,698 (as of 1 January 2015) and a metropolitan population of 1,992,114 (as of 1 January 2015). It is situated on the eastern coast of Zealand, 164 km (102 mi) east of Odense and 28 km (17 mi) northwest of Malmö, Sweden. The city stretches across parts of the island of Amager and contains the enclave of Frederiksberg, a municipality in its own right.

Since the turn of the 21st century, Copenhagen has seen strong urban and cultural development, facilitated by investment in its institutions and infrastructure. The city is the cultural, economic and governmental centre of Denmark; it is one of the major financial centres of Northern Europe with the Copenhagen Stock Exchange. In 2012, Copenhagen was third in the ranking of the richest cities in the world in terms of gross earnings, dropping from first place in 2009. Since the completion of the Øresund Bridge, a road, railway and tunnel project, the metropolitan area of Copenhagen has become increasingly integrated with the Swedish province of Scania and its largest city, Malmö, known as the Øresund Region. With a number of bridges connecting the various districts, the cityscape is characterized by parks, promenades and waterfronts.

Copenhagen's landmarks such as Tivoli Gardens, the Little Mermaid Statue, the Amalienborg and Christiansborg palaces, Rosenborg Castle, Frederik's Church, and many museums, restaurants and nightclubs are significant tourist attractions. In addition to recent developments in the city service sector and the pharmaceutical industry, there have been a number of initiatives in clean technology, supporting the city's goal to be carbon-neutral by 2025. 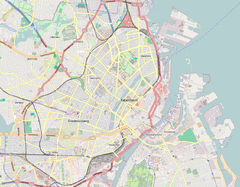 Parken Stadium
Locations of the candidate venues. The chosen venue is marked in red. The venues marked in orange were short-listed venues in the final bidding stage.

The bidding phase for the edition kicked off the day after the results of the fourteenth edition. Any city could apply to host the competition, as long as their venues fulfilled the requirements that DR applied. Those were the following:

Only two cities had applied to host the contest: the capital city, Copenhagen, and Herning, the city which hosted the twelfth edition. Forum Copenhagen and Parken Stadium, both located in the capital city of the country, were the first venues that joined the bid to host the competition. Jyske Bank Boxen in Herning, the venue which hosted the twelfth edition, also joined the bidding phase. Copenhagen later added a third venue to their submission: the B&W Hallerne, the venue which hosted the 2014 Eurovision Song Contest.

It was revealed by the broadcaster on 23 June 2015 that both Jyske Bank Boxen in Herning and B&W Hallerne in Copenhagen withdrew from the bidding phase due to event scheduling problems. Following the withdrawal of the two venues, Copenhagen was left as the only city in the bidding phase and therefore was selected as the host city as its only contestant, Herning, withdrew.

On 3 July 2015, right after the running order draw of the edition, DR held a press conference in which it was announced that the Parken Stadium would be the host venue for the edition.

The draw that determined the running order of the edition took place on 3 July 2015 at the headquarters of DR in Copenhagen. Two countries from each semi-final and a big 6 country received a wildcard and could select their starting position at their half (first or second). Bosnia and Herzegovina and the Faroe Islands got the wildcards from the first semi-final, Italy and Ukraine got the wildcards from the second semi-final while Norway got the wildcard of the big 6. The running order draw for the semi-final qualifiers took place after the results of each semi-final with each of the qualifiers drawing their starting position. 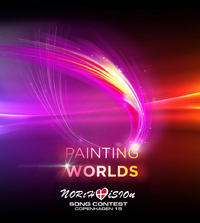 The first version of the logo.

The slogan of the edition was "Painting Worlds". The logo was designed by Rick Saaltud, Daniel Lengfeld and Jessica Weaver. The logo's first version was slightly different than the second and official version. The first version of the logo featured a flare with the slogan "Painting Worlds" featured below. However, due to some controversies that occured with the flare in the logo, it was decided that the flare would be replaced and the theme would be changed slightly.

The second and final version of the theme represented a painted and multi-coloured butterfly and reflected the slogan "Painting Worlds" as an attempt to promote diversity and originality both in the musical and social aspects of the music festival. 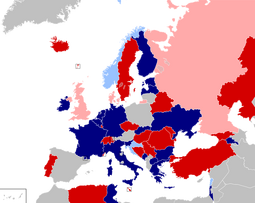 Forty-six countries participated in the edition, the smallest number of participants since the ninth edition. Bulgaria, Moldova and Romania all returned after having one edition break.

Seven countries announced their withdrawals: Albania, Austria, Cyprus, Morocco and Lithuania withdrew from the fifteenth edition due to their head of delegation resigning from their positions meaning one edition break according to the rules. AzTV confirmed Azerbaijan's withdrawal from the contest due to the recent set of results for the country. TVP confirmed Poland's withdrawal due to low public viewing figures and failing to qualify in the previous edition. A decision to return in the next edition is not ruled out for both countries.

SMTV announced that San Marino would not be returning to the contest. Spain and TVE originally confirmed its return to the fifteenth edition but was ejected on 25 June due to its head of delegation being banned from the contest.

Twenty countries participated in the first semi-final. Denmark, Russia and the United Kingdom also voted in this semi-final. The highlighted countries qualified for the final.

Twenty countries participated in the second semi-final. Croatia, Lebanon and Norway also voted in this semi-final. The highlighted countries qualified for the final.

Twenty-six countries participated in the final, with all forty-six participating countries eligible to vote.

The eighth OGAN Second Chance Contest took place for this edition. The OGAN clubs of each country could submit one of their national selection entries to compete in the contest with some rules applying for the entries. United Kingdom won the contest with Alesha Dixon and her song "The Way We Are".

LTV announced Diana Arte as the Latvian representative for the edition with the song "Dangerously Sexy". However, the broadcaster later published a poll where people could vote if the song should be sent to the contest or be replaced by Markus Riva and his "Krasiva Silno".

TVE originally confirmed its return to the fifteenth edition and had already submitted a song to the NBU but was rejected on 25 June 2015 due to its head of delegation being banned from the contest.

Countries that are active members of the North Broadcasting Union (NBU), are also eligible to participate in the North Vision Song Contest. As in every edition, an invitation to all the members have been sent in order to confirm whether they will participate or not. Forty-six countries confirmed their participation in the edition. The following list of countries declined stating their reasons as shown below.

1 Romania voted again before Tunisia due to an error with their votes.

Retrieved from "https://nvsc.fandom.com/wiki/North_Vision_Song_Contest_15?oldid=50994"
Community content is available under CC-BY-SA unless otherwise noted.