North Vision Song Contest 16, often referred to as NVSC 16 was the 16th edition of the North Vision Song Contest. It was held in Jerusalem, Israel. The country hosted the contest for the second time, after The Young Professionals along with Anna F. won the fifteenth edition with their song "All of It But Me". IBA chose the Jerusalem Payis Arena to host the three shows of the edition. The Young Professionals members Ivri Lider and Johnny Goldstein were selected as the presenters of the edition along with Bar Refaeli.

Fifty countries participated in the edition. Belgium, Greece, Hungary, Iceland and Latvia announced their withdrawal from the edition. The edition saw the return of nine countries: Albania, Austria, Azerbaijan, Cyprus, Lithuania, Morocco, Poland, San Marino and Spain. The first seven returned to the contest after withdrawing from the previous edition while the last two returned after their two-editions absence.

Switzerland was the winner of the edition with the song "Movies" performed by Rykka which scored 211 points, 35 points ahead the runner-up, Moldova. This marked the second time that the country wins the contest and also the second time a pre-qualification round qualifier wins the contest. However, it was the first time that two pre-qualification round qualifiers made it to the top two. Italy was on third place, making it the best place achieved by a big 6 country. Kazakhstan, Turkey and Spain were on fourth, fifth and sixth places with the last achieving their best result since their debut.

Jerusalem located on a plateau in the Judean Mountains between the Mediterranean and the Dead Sea, is one of the oldest cities in the world. It is considered holy to the three major Abrahamic religions—Judaism, Christianity and Islam. Israelis and Palestinians both claim Jerusalem as their capital, as Israel maintains its primary governmental institutions there and the State of Palestine ultimately foresees it as its seat of power; however, neither claim is widely recognized internationally.

Today, the status of Jerusalem remains one of the core issues in the Israeli–Palestinian conflict. During the 1948 Arab–Israeli War, West Jerusalem was among the areas captured and later annexed by Israel while East Jerusalem, including the Old City, was captured and later annexed by Jordan. Israel captured East Jerusalem from Jordan during the 1967 Six-Day War and subsequently annexed it. Israel's 1980 Basic Law the Jerusalem Law refers to Jerusalem as the country's undivided capital and all branches of the Israeli government are located in Jerusalem, including the Knesset (Israel's parliament), the residences of the Prime Minister and President, and the Supreme Court. The international community rejected the annexation as illegal and treats East Jerusalem as Palestinian territory occupied by Israel. The international community does not recognize Jerusalem as Israel's capital, and the city hosts no foreign embassies. Jerusalem is home to the Hebrew University and to the Israel Museum with its Shrine of the Book.

The draw that determined the semi-final allocation was held on 14 September 2015 at Jerusalem town hall in Jerusalem. As the pre-qualification round would start after the draw, the spot for the five pre-qualification round qualifiers were drawn first. The big 6 countries were first drawn to determine in which semi-final each would country vote. Israel, Italy and Sweden were drawn to vote in the first semi-final while Algeria, Denmark and Russia were drawn to vote in the second semi-final. The rest of the thirty-five countries were divided into six pots, based on their geographical place. Each time a country was drawn from the pot, its semi-final and half of the semi-final was determined. 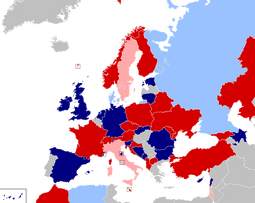 Nine countries participated in the seventh pre-qualification round. Bosnia and Herzegovina, Ireland, Moldova, Slovakia and Switzerland qualified to the semi-finals while Armenia, Portugal, Serbia and Tunisia were eliminated.

Twenty countries participated in the first semi-final. Israel, Italy and Sweden also voted in this semi-final. The highlighted countries qualified for the final.

Twenty countries participated in the second semi-final. Algeria, Denmark and Russia also voted in this semi-final. The highlighted countries qualified for the final.

Twenty-six countries participated in the final, with all fifty participating countries eligible to vote.

The ninth OGAN Second Chance Contest took place for this edition. The OGAN clubs of each country could submit one of their national selection entries to compete in the contest with some rules applying for the entries. Spain won the contest with Alvaro Soler and his song "El Mismo Sol".

Despite originally announcing Seldi Qalliu as their entrant, KlanTV later revealed that Lindita would represent the country with the song "Cold World".

ORF hosted a national selection, which was won by Capcha One and "Alone Again". However, as the song turned out to be a sample, the runner-up "Adieu" by Zoë was chosen to represent the country instead.

Countries that are active members of the North Broadcasting Union (NBU), are also eligible to participate in the North Vision Song Contest. As in every edition, an invitation to all the members have been sent in order to confirm whether they will participate or not. Fifty countries confirmed their participation in the edition. The following list of countries declined stating their reasons as shown below.

Retrieved from "https://nvsc.fandom.com/wiki/North_Vision_Song_Contest_16?oldid=65396"
Community content is available under CC-BY-SA unless otherwise noted.