North Vision Song Contest 17, often referred to as NVSC 17 was the 17th edition of the North Vision Song Contest. It was held in Zürich, Switzerland. The country hosted the contest for second time, after Rykka won the sixteenth edition with her song "Movies". SRG SSR chose the Hallenstadion in Zürich to serve as the host venue for the edition, while Susanne Wille, Monika Fasnacht and Amanda Ammann were selected as the presenters.

Forty-nine countries participated in the edition. Belgium, Greece, Hungary, Iceland and Latvia returned to the contest after their one-edition absence while Albania, the Czech Republic, Israel, Luxembourg, Montenegro and Tunisia announced their withdrawal from the contest each for different reasons.

Belgium was the winner of the edition with the song "Fear Nothing" performed by Selah Sue which got 202 points, 32 points ahead the runner-up, Poland. This was the first time Belgium won the contest and it was their best result since the third place in the fourth edition. Turkey was on third place, making it the only big 6 country to finish within the top 6 again. Denmark, Slovenia and Slovakia completed the top 6 of the edition.

Zürich is the largest city in Switzerland and the capital of the canton of Zürich. It is located in north-central Switzerland at the northwestern tip of Lake Zürich. The municipality has approximately 400,028 inhabitants, the urban agglomeration 1.315 million, and the Zurich metropolitan area 1.83 million. Zürich is a hub for railways, roads, and air traffic. Both Zürich Airport and railway station are the largest and busiest in the country.

The official language of Zürich is (the Swiss variety of Standard) German, but the main spoken language is the local variant of the Alemannic Swiss German dialect. Zürich is a leading global city and among the world's largest financial centres despite a relatively low population. The city is home to a large number of financial institutions and banking giants. Most of Switzerland's research and development centres are concentrated in Zürich and the low tax rates attract overseas companies to set up their headquarters there.

Many museums and art galleries can be found in the city, including the Swiss National Museum and the Kunsthaus. Schauspielhaus Zürich is one of the most important theatres in the German-speaking world. 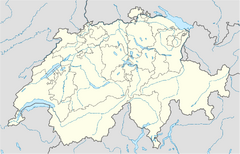 Zürich
Locations of the candidate cities. The chosen city is marked in red.

On 15 November 2015, it was revealed that Zürich was selected as the host city with the Hallenstadion. The Swiss Head of Delegation stated that the venue is "the perfect place to host the contest".

The draw that determined the semi-final allocation was held on 17 November 2015 at the Dolder Grand Hotel in Zürich. As the pre-qualification round would start after the draw, the spot for the five pre-qualification round qualifiers were drawn first. The big 6 countries were first drawn to determine in which semi-final each would country vote. Kazakhstan, Switzerland and Turkey were drawn to vote in the first semi-final while Italy, Moldova and Spain were drawn to vote in the second semi-final. The rest of the thirty-five countries were divided into six pots, based on their geographical place. Each time a country was drawn from the pot, its semi-final and half of the semi-final was determined. 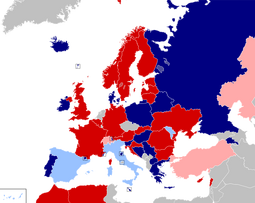 Six countries, however, announced their withdrawal from the contest. Tunisia announced that after their set of bad results, they had no longer interest in the contest while the Czech Republic, Israel and Montenegro announced their withdrawal citing their Head of Delegation change as the reason. Albania and Luxembourg were both forced to withdraw as the first failed to submit their votes last edition while the second failed to submit a song within the deadline.

Eight countries participated in the eighth pre-qualification round. Cyprus, the FYR Macedonia, Lithuania, Liechtenstein and Malta qualified to the semi-finals while Azerbaijan, Georgia and the Netherlands were eliminated.

Twenty countries participated in the first semi-final. Kazakhstan, Switzerland and Turkey also voted in this semi-final. The highlighted countries qualified for the final.

Twenty countries participated in the second semi-final. Italy, Moldova and Spain also voted in this semi-final. The highlighted countries qualified for the final.

Twenty-six countries participated in the final, with all forty-nine participating countries eligible to vote.

The tenth OGAN Second Chance Contest took place for this edition. The OGAN clubs of each country could submit one of their national selection entries to compete in the contest with some rules applying for the entries. Denmark won the contest with Ericka Jane and her song "Favorite Lie".

A few days before the final show, it was discovered that Groong by Lazzaro, Aidin Davoudi and Alin Goyan was actually a modern remake of a traditional Armenian song. However, as the votes had already been counted and the results were to be presented, the entry wasn't disqualified.

Countries that are active members of the North Broadcasting Union (NBU) are also eligible to participate in the North Vision Song Contest. As in every edition, an invitation to all the members have been sent in order to confirm whether they will participate or not. Forty-nine countries confirmed their participation in the edition. The following list of countries declined stating their reasons as shown below.

Retrieved from "https://nvsc.fandom.com/wiki/North_Vision_Song_Contest_17?oldid=61591"
Community content is available under CC-BY-SA unless otherwise noted.