North Vision Song Contest 18, often referred to as NVSC 18 was the 18th edition of the North Vision Song Contest. It was held in Brussels, Belgium after Selah Sue won the seventeenth edition with her song "Fear Nothing". It was the first time that Belgium hosted the contest. VRT chose Forest National to serve as the host venue for the edition while An Lemmens and Maureen Louys were selected as the presenters.

Fifty-one countries participated in the edition with Egypt making their debut appearance. Albania, the Czech Republic, Israel, Luxembourg and Montenegro returned to the competition after their one edition absence while Bulgaria, France, Monaco and the Netherlands announced their withdrawal from the edition each for different reasons.

Italy was the winner of the edition with the song "No Hero" performed by Elisa which got 186 points. This was the second time after the twelfth edition that there was a tie between the winner and the runner-up. Andorra finished as the runner-up according the tie-breaking rules. Norway finished on third place while Iceland and Estonia completed the top six of the edition. It was the first edition since the twelfth edition that no countries of the big 6 finished in the top 6 with Belgium, who finished thirteenth, achieving the best place from the big 6.

Brussels, officially the Brussels-Capital Region, is a region of Belgium comprising 19 municipalities, including the City of Brussels which is the capital of Belgium, the French Community of Belgium, and the Flemish Community. The region has a population of 1.2 million and a metropolitan area with a population of over 1.8 million, the largest in Belgium.

Since the end of the Second World War, Brussels has been a major centre for international politics and has become the polyglot home of numerous international organisations, politicians, diplomats and civil servants. Brussels is the de facto capital (or one of three capitals including Luxembourg and Strasbourg) of the European Union as it hosts a number of principal EU institutions. The secretariat of the Benelux and the headquarters of the North Atlantic Treaty Organization (NATO) are also located in Brussels.

Historically a Dutch-speaking city, it has seen a major shift to French from the late 19th century onwards. Today the majority language is French, and the Brussels-Capital Region is an officially bilingual enclave within the Flemish Region. All road signs, street names, and many advertisements and services are shown in both languages. Brussels is increasingly becoming multilingual with increasing numbers of migrants, expatriates and minority groups speaking their own languages. 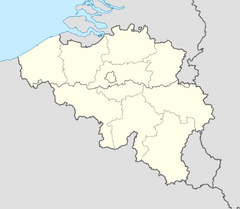 Brussels
Locations of the candidate cities. The chosen city is marked in red.

The host city was revealed to be Brussels along with the theme presentation on 31 January 2016.

The draw that determined the semi-final allocation was held on 6 February 2016 at the Le Châtelain hotel in Brussels. As the pre-qualification round would take place after the draw, the spot for the two PQR qualifiers were drawn first. The big 6 countries were first drawn to determine in which semi-final each would country vote. Denmark, Poland and Turkey were drawn to vote in the first semi-final while Belgium, Slovakia and Slovenia were drawn to vote in the second semi-final. The rest of the thirty-eight countries were divided into six pots, based on their geographical place. Each time a country was drawn from the pot, its semi-final and half of the semi-final was determined. Spain was pre-allocated to perform in the second semi-final for scheduling reasons. 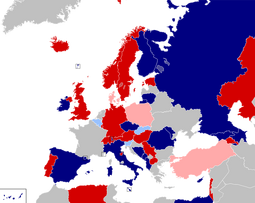 Four countries, however, announced their withdrawal from the contest. France and the Netherlands cited the change of the Head of Delegation as the reason of their withdrawal. Both Bulgaria and Monaco originally confirmed their participation in the contest but later withdrew from the edition, the first due to strife within the broadcaster and the latter due to missing the songs deadline.

Five countries participated in the ninth pre-qualification round. Belarus and Ukraine qualifed to the semi-finals, while Croatia, Latvia and Morocco were eliminated.

Twenty-one countries participated in the first semi-final. Denmark, Poland and Turkey also voted in this semi-final. The highlighted countries qualified for the final.

Twenty-one countries participated in the second semi-final. Belgium, Slovakia and Slovenia also voted in this semi-final. The highlighted countries qualified for the final.

Twenty-six countries participated in the final, with all fifty-one participating countries eligible to vote.

The eleventh OGAN Second Chance Contest took place for this edition. The OGAN clubs of each country could submit one of their national selection entries to compete in the contest with some rules applying for the entries. Sweden won the contest with Ida LaFontaine and her song "Go Again".

Shortly before the announcement of the first semi-final results, the executive producer of the contest Jan Simonis announced that the Greek jury votes were disqualified due to them being announced before the results. The votes of the country were based solely on the country's televoting results.

Countries that are active members of the North Broadcasting Union (NBU) are also eligible to participate in the North Vision Song Contest. As in every edition, an invitation to all the members have been sent in order to confirm whether they will participate or not. Fifty-one countries confirmed their participation in the edition. The following list of countries declined stating their reasons as shown below.

Retrieved from "https://nvsc.fandom.com/wiki/North_Vision_Song_Contest_18?oldid=51007"
Community content is available under CC-BY-SA unless otherwise noted.