North Vision Song Contest 19, often referred to as NVSC 19, was the nineteenth edition of the North Vision Song Contest. It was the first time that Italy hosts the contest after Elisa won the eighteenth edition with her song "No Hero". There was no pre-qualification round held this edition, making it the third edition not to have the event following the ninth and fifteenth editions. The contest was held in three difference locations for the first time; Genoa hosted the first semi-final, Milan hosted the second semi-final and Turin hosted the final. RAI selected Federico Russo, Sabrina Impacciatore and Dear Jack lead member Alessio Bernabei as the presenters of the edition.

Forty-eight countries participated in the edition. Bulgaria, France and the Netherlands returned to the competition after their one edition absence while Belarus, Croatia, FYR Macedonia, Ireland, Morocco and Portugal announced their withdrawal from the edition each for different reasons.

Albania was the winner of the edition with the song "A Do Si Kjo" performed by Ronela Hajati which got 355 points. Germany finished as the runner-up. Sweden finished on third place while Kazakhstan, Poland and Spain completed the top six of the edition. It was the second edition in a row that no countries of the big 6 finished in the top 6 with Iceland, who finished on the eleventh place, achieving the best place from the big 6.

Italy is a unitary parliamentary republic in Europe. Italy covers an area of 301,338 km2 (116,347 sq mi) and has a largely temperate seasonal climate; due to its shape, it is often referred to in Italy as lo Stivale (the Boot). With 61 million inhabitants, it is the 4th most populous EU member state. Located in the heart of the Mediterranean Sea, Italy shares open land borders with France, Switzerland, Austria, Slovenia, San Marino and Vatican City.

Despite winning the previous edition, the Italian broadcaster reported that it is unsure whether the country will be able to host the edition. The broadcaster said that due to budget cuts internally, as well as other expenses, the Italian hosting of the contest was in jeopardy. However, it was revealed later that Italy will host the contest. It was also revealed that the edition would be hosted in three different cities, one for each show. 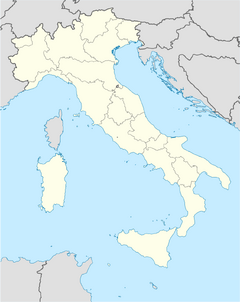 Genoa
Locations of the candidate cities. The chosen cities are marked in red.

After it was speculated that Italy wouldn't be able to host, it was revealed that instead of one city, three cities would host the edition–one for each show of the edition. Cities in Italy could apply to become one of the three host cities of the edition since 28 April 2016.

On 4 May 2016, RAI announced the first five cities that had applied to host the edition. The first city that applied was Milan, the second most populous city in the country. The city applied with the Mediolanum Forum which can hold up to 12,700 people. The second venue that entered the bid was PalaLivorno, located in the city of Livorno, with a capacity of 8,000. Turin was the third city that joined the bidding phase. They applied to host with Pala Alpitour, the largest venue in the country with a capacity of 16,000. The capital city of the country, Rome, also joined the bidding phase with PalaLottomatica as their venue which can hold up to 12,200 people. Last city to join the bidding phase was Florence with the Nelson Mandela Forum which has a capacity of 7,500

The rest of the applicants were revealed on 9 May 2016. Turin added one more venue to their application; Torino Palavela with a seating capacity for 8,244 people. Genoa applied to host the event with Palasport di Genova, which can hold up to 10,000 people, as their venue of choice. The last venue to join the bidding phase was Unipol Arena, located in the city of Bologna, with a capacity of 11,000.

RAI announced the three host cities and venues during a press conference which was held on 18 May 2016. Palasport di Genova in Genoa was selected for the first semi-final, Mediolanum Forum in Milan for the second semi-final and Pala Alpitour in Turin for the final.

Unlike the previous editions, the running order of the edition was not decided by a random draw as it was decided by the NBU that the running order of the semi-finals and the final of the edition would be decided by producers appointed by both the NBU and the host broadcaster RAI. The NBU said that this was done in order to make the shows more exciting and to ensure that all contestants had a chance to stand out, preventing entries that are too similar cancelling each other out.

The NBU announced on 17 May 2016 that there would be a new voting system introduced during the edition, making it the first major voting system change since the first edition. The countries would now award two sets of 1-8, 10 and 12 points; one from their professional jury and the other from televoting. The jury votes will be presented by the spokesperson appointed by each broadcaster with the 1-7 points appearing on screen and 8, 10 and 12 being announced by the spokesperson. After all the jury votes are cast by the participating countries, the hosts will present the televoting results of the countries starting with the country that received the less points to the country that received the most points from televoting. The new voting system also applied to the semi-finals to determine the ten qualifiers but as before the qualifiers are announced in a random order.

The Rest of the World jury was also introduced in the edition. The jury will not be included in either the jury or the televoting and will be announced as a separate voter by the presenters at the start of the voting. Viewers from the countries that are not participating will be able to cast their votes and the top ten most voted countries will receive 1-8, 10 and 12 points. 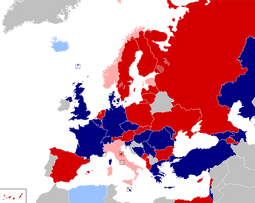 Spain originally announced their withdrawal mostly due to budget cuts and low interest in both the country's national selection and the contest. However, it was later announced that due to the high interest that was shown during the final of the eighteenth edition, the broadcaster decided to compete in the edition.

Twenty-one countries participated in the first semi-final. Estonia, Italy and Norway also voted in this semi-final. The highlighted countries qualified for the final.

Twenty-one countries participated in the second semi-final. Algeria, Andorra and Iceland also voted in this semi-final. The highlighted countries qualified for the final.

Twenty-six countries participated in the final, with all forty-eight participating countries eligible to vote.

The twelfth OGAN Second Chance Contest took place for this edition. The OGAN clubs of each country could submit one of their national selection entries to compete in the contest with some rules applying for the entries. Liechtenstein won the contest with Quentin Mosimann featuring Amanda Wilson and their song "Hello".

On 30 April 2016, it was announced by Jednotka that their previously announced entry, "Vlasy" by Fallgrapp would be replaced by a new song; Zuzana Smatanová, who previously represented the country in the seventh edition, would perform her song "Horou" instead. However, no reason was given for the entry change.

TVE announced that due to the Spanish delegation being unable to find sponsors, low interest in the national selection and the contest itself, that Spain would withdraw in order to save money and increase the contest's popularity in Spain. However, it was later announced that due to the high interest that was shown during the final of the eighteenth edition, the broadcaster decided to reverse the withdrawal and compete in the edition.

It was revealed after the results that there was a mistake during the televoting; 12 points were missing from Estonia's score which were added to Iceland's score instead. After the correction of the scores, Estonia rose to the 12th place (instead of the previous 15th place) while Iceland remained at the 11th place.

Retrieved from "https://nvsc.fandom.com/wiki/North_Vision_Song_Contest_19?oldid=51023"
Community content is available under CC-BY-SA unless otherwise noted.