North Vision Song Contest 2, often referred as NVSC 2, was the 2nd edition of North Vision Song Contest. It took place in Reykjavik, Iceland, following Greta Salome's victory in the 1st edition. It was the first time that Iceland hosted the contest. Ríkisútvarpið (RÚV) selected the Laugardalshöll as the venue for the contest while Páll Óskar was selected as the host. Forty-five countries participated in the edition including Armenia, Bulgaria, Israel, Malta, Moldova, Slovakia and Slovenia that made their debut appearance in the edition. Georgia, Italy and Monaco announced their withdrawal from the edition.

The winner of the edition was Switzerland with the song "The Man I Need" performed by TinkaBelle, which scored 200 points with a 20 points lead ahead the second time runner-up, Denmark. The micro-states Andorra and San Marino finished in the top 5 with the third and fourth places respectively while Finland took the fifth place making it the fourth Nordic country to achieve a top 5 result. Norway was once again near the top 5, just on the sixth place.

Reykjavík is the capital and largest city in Iceland. The first permanent settlement in Iceland by Norsemen is believed to have been established in Reykjavík by Ingólfur Arnarson around AD 870; this is described in Landnámabók, or the Book of Settlement. Ingólfur Arnarson is said to have decided the location of his settlement using a traditional Viking method; by casting his high seat pillars (Öndvegissúlur) into the ocean when he saw the coastline, then settled where the pillars came to shore. Steam from hot springs in the region is said to have inspired Reykjavík's name, which loosely translates to Smoke Cove (the city is often referred to as the Bay of Smokes or Bay of Smoke). The original name was Reykjarvík with an additional "r" that vanished around 1300.

Reykjavík is not mentioned in any medieval sources except as a regular farm land but the 18th century saw the beginning of urban concentration there. The Danish rulers of Iceland backed the idea of domestic industry in Iceland that would help to stimulate much-needed progress on the island. In 1752, the King of Denmark donated the estate of Reykjavík to the Innréttingar Corporation; the name comes from Danish "indretninger", meaning enterprise. The leader of this movement was Skúli Magnússon. In the 1750s several houses were constructed to house the wool industry that was to be Reykjavík's most important employer for a few decades and the original reason for its existence. Other crafts were also practiced by the Innréttingar, such as fisheries, sulphur mining, agriculture, and shipbuilding. The Danish Crown abolished monopoly trading in 1786 and granted six communities around the country an exclusive trading charter, Reykjavík was one of them and the only one to hold on to the charter permanently. The year 1786 is regarded as the date of the city's founding; its 200th anniversary was celebrated in 1986. Trading rights were still limited to the subjects of the Danish Crown however, and Danish traders continued to dominate trade in Iceland. Over the following decades, their business in Iceland expanded. After 1880, free trade was expanded to all nationalities and the influence of Icelandic merchants started to grow. 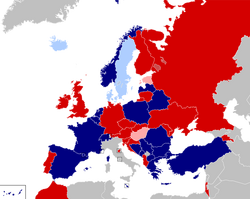 The submissions for the second edition opened a few days after the first edition started. However, the nations couldn't confirm their songs until the first edition was done. Forty-five countries confirmed participation with Armenia, Bulgaria, Israel, Malta, Moldova, Slovakia and Slovenia making their debut. Georgia and Italy decided to withdraw, while Monaco was forced to do the same.

Twenty countries participated in the first semi-final. Estonia and Hungary also voted in this semi-final. The highlighted countries qualified for the final.

Twenty countries competed in the second semi-final. Denmark, Iceland and Sweden also voted in this semi-final. The highlighted countries qualified for the final.

Twenty-five countries participated in the final, with all forty-three participating countries eligible to vote.

Countries that are active members of the North Broadcasting Union (NBU), are also eligible to participate in the North Vision Song Contest. As in every edition, an invitation to all the members had been sent in order to confirm whether they will participate or not. Forty-five countries confirmed their participation in the edition. The following list of countries declined stating their reasons as shown below.

Retrieved from "https://nvsc.fandom.com/wiki/North_Vision_Song_Contest_2?oldid=66739"
Community content is available under CC-BY-SA unless otherwise noted.