North Vision Song Contest 21, often referred to as NVSC 21, was the twenty-first edition of the North Vision Song Contest. It took place in Prague after Lenny won the twentieth edition with her song "Hell.o". The O2 Arena was selected as the host venue while Olga Lounová, who represented the Czech Republic in the eighteenth edition, was selected as the presenter for the edition.

Forty-seven countries participated in the contest. This includes the return of one country, Serbia. Hong Kong, the special guest of the previous edition was granted another participation due to their top 3 result. However, seven countries also announced their withdrawal. Algeria, Slovenia, Azerbaijan, Finland, Iceland, Ireland, Kazakhstan, and Montenegro. The latter had initially confirmed their participation but eventually withdrew.

Bulgaria was declared as the winner of the edition with the song "K'vo ne chu" performed by Dara. The song gathered a total of 417 points, 65 points ahead the runner-up Belgium. Morocco placed third, getting a top 6 result for the first time, while Ukraine and Sweden placed fourth and fifth respectively. Faroe Islands placed sixth and got their best result in the competition since their sixth place in their debut edition. France and Moldova got the best results among the big 6 countries by placing tenth and eleventh respectively, while the rest of the big 6 finished in the bottom 5.

The Czech Republic is a nation state in Central Europe bordered by Germany to the west, Austria to the south, Slovakia to the east and Poland to the northeast. The Czech Republic covers an area of 78,866 square kilometres (30,450 sq mi) with mostly temperate continental climate. It is a unitary parliamentary republic, has 10.5 million inhabitants and the capital and largest city is Prague, with over 1.2 million residents. The Czech Republic includes its historical territories of Bohemia, Moravia, and Czech Silesia

The Czech Republic joined NATO in 1999 and the European Union in 2004; it is a member of the United Nations, the OECD, the OSCE, and the Council of Europe. It is a developed country with an advanced, high income economy and high living standards. The UNDP ranks the country 14th in inequality-adjusted human development. The Czech Republic also ranks as the 6th most peaceful country, while achieving strong performance in democratic governance. It has the lowest unemployment rate in the European Union. 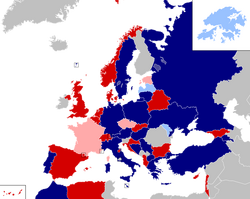 Forty-seven countries participated in the contest. One country returned to the contest; Serbia, who last took part in the nineteenth edition. Hong Kong was also granted a second participation in the contest after they achieved a top six place in the anniversary edition where they competed as a guest.

Twenty countries participated in the first semi-final. Czech Republic, Estonia and France also voted in this semi-final. The highlighted countries qualified for the final.

Twenty countries participated in the first semi-final. Hong Kong, Latvia and Moldova also voted in this semi-final. The highlighted countries qualified for the final.

Twenty-six countries participated in the final, with all forty-six participating countries eligible to vote.