The winner was Austria with the song "Mirrors". This was Austria's first ever win. The winning country Austria achieved its best result to date. Hosts Sweden were the runner up, gaining their eighth top-three placing, whilst Italy came third for the second time. Belgium were fourth, gaining their second best result since their win in the 17th edition. Spain and Morocco rounded up the top six. Moldova came last for the second time in a final, achieving its joint worst result in a final to date. Hungary, Greece and Germany also received their (joint) worst results in a final to date.

Sweden (Swedish: Sverige), officially the Kingdom of Sweden, is a Scandinavian country in Northern Europe. It borders Norway to the west and north and Finland to the east, and is connected to Denmark in the southwest by a bridge-tunnel across the Öresund. At 450,295 square kilometres (173,860 sq mi), Sweden is the third-largest country in the European Union by area, but, with a total population of 10.0 million, it has a low population density of 22 inhabitants per square kilometre (57/sq mi); the highest concentration is in the southern half of the country. Approximately 85% of the population lives in urban areas.

Germanic peoples have inhabited Sweden since prehistoric times, emerging into history as the Geats/Götar and Swedes/Svear and constituting the sea peoples known as the Norsemen. Southern Sweden is predominantly agricultural, while the north is heavily forested. Sweden is part of the geographical area of Fennoscandia. The climate is in general very mild for its northerly latitude due to significant maritime influence, that in spite of this still retains warm continental summers. Today, Sweden is a constitutional monarchy and parliamentary democracy, with a monarch as head of state, like its neighbour Norway. The capital city is Stockholm, which is also the most populous city in the country. Legislative power is vested in the 349-member unicameral Riksdag. Executive power is exercised by the government chaired by the prime minister. Sweden is a unitary state, currently divided into 21 counties and 290 municipalities.

The thirty-six semi-finalists were allocated into six pots, based on their geographical place and cultural similarities. Drawing from different pots helps in reducing the chance of so-called neighbour voting and increasing suspense in the semi-finals. Each time a country was drawn from the pot, its semi-final and half of the semi-final was determined. 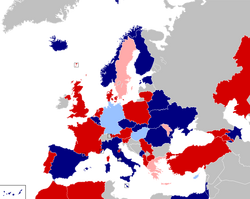 Seven countries participated in the eleventh pre-qualification round. FYR Macedonia, Kazakhstan, Montenegro and Romania qualifed to the semi-finals, while Bosnia and Herzegovina, Russia and Switzerland were eliminated.

Twenty countries participated in the first semi-final. Greece, Moldova and Sweden also voted in this semi-final. The highlighted countries qualified for the final.

Twenty countries participated in the second semi-final. Cyprus, Germany and Hungary also voted in this semi-final. The highlighted countries qualified for the final.

26 countries participated in the final, with all 49 participating countries eligible to vote.

Countries that are active members of the North Broadcasting Union (NBU) are also eligible to participate in the North Vision Song Contest. As in every edition, an invitation to all the members have been sent in order to confirm whether they will participate or not.

Retrieved from "https://nvsc.fandom.com/wiki/North_Vision_Song_Contest_23?oldid=63614"
Community content is available under CC-BY-SA unless otherwise noted.