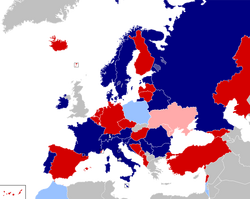 45 countries participated in the edition, making it one of the editions with the less amount of participants, tying with the 9th and 2nd editions and the 1st edition being the only one to have less participants (41). 5 countries returned to the competition during this edition: Belgium, Estonia, Ireland and Switzerland returned after their one-edition abscence while Bulgaria returned after being away for 2 editions.

A total of 7 countries withdrew from the edition; Armenia, Cyprus, Egypt, FYR Macedonia, Greece, Liechtenstein and the United Kingdom. The United Kingdom withdrew for the first time since their debut in the 1st edition.

Luxembourg, Moldova and Ukraine will also vote in this semi-final.

Israel, Morocco and Poland will also vote in this semi-final.

On 28 May 2018, details about the song Natalia Podolskaya would be singing at Casablanca were leaked by an unknown source. BTRC immediately rejected the rumours and said that the entry is yet to be announced publicly. The North Broadcasting Union took action, mentioning that "there's no fair play in leaking entries without the consent of the Head of Delegation" and also said that these kind of actions "ruin the fun of the contest". Details of the leak were swiftly removed by the North Broadcasting Union.

On 10 June 2018, the Latvian broadcaster announced their entry for the edition; Auļi un Tautumeitas would represent the country with the song "Dzied’ papriekšu, brāļa māsa". However, it was eventually discovered that the song was a remake of an old traditional folk song. Therefore, the country was forced to change their entry. The Latvian broadcaster was given an extra day to submit their song. The broadcaster was not fined by the NBU despite the song breaching the contest's rules, as the song was approved by the NBU beforehand.

LBC posted a teaser of their entry on 30 April 2018. However, one day later it was announced that the broadcaster would be changing their entry due to the song being a cover of a 1956 song. Subsequently, the Lebanese broadcaster had to disqualify their entry and select another song.

Retrieved from "https://nvsc.fandom.com/wiki/North_Vision_Song_Contest_25?oldid=63596"
Community content is available under CC-BY-SA unless otherwise noted.