North Vision Song Contest 3, often referred as NVSC 3, was the 3rd edition of North Vision Song Contest. It took place in Winterthur, Switzerland, following TinkaBelle's victory in the 2nd edition. It was the first time that Switzerland hosted the contest. Schweizer Radio und Fernsehen (SRF) selected the Eulachhalle as the venue for the contest while Tanja Bachmann from TinkaBele was selected as the host. Forty-eight countries participated in the edition including Azerbaijan and Liechtenstein that made their debut appearance in the edition with Georgia and Italy returning. Bulgaria announced their withdrawal from the edition.

The winner of the edition was Sweden with the song "One Step From Paradise" performed by Malena Ernman, which scored 194 points with a 13 points lead ahead the runner-up, France. FYR Macedonia finished on the third place, followed by Romania and Ireland in the fourth and fifth places respectively.

During the Roman era, from 70 AD to around 400 AD, there was a Roman settlement in what would become Oberwinterthur. This settlement, known as Vitudurum, was initially a Vicus that later included a fort.

The first buildings, in what would become the old city of Winterthur, date to around 600–700. Around 1000, the town became the capital of the counts of Kyburg. They built walls, a moat and towers around the town. In 1264 the Habsburg family inherited Winterthur when the last male of the counts of Kyburg died. In the same year Winterthur gained city rights from the new owners. From 1415 until 1442 Winterthur became reichsfrei or subject only to the Holy Roman Emperor. However, in the Old Zürich War they lost this freedom and came back under the control of the Austrian Habsburgs. Needing money, in 1467, the Habsburgs sold Winterthur to the city of Zurich. In the time under the leadership of Zurich, Winterthur's economic freedom was restricted. They lost many of their market rights and the right to trade in some goods. This ended in 1798 when Napoleonic troops liberated the town.

On 27 May 1799, it was the site of the Battle of Winterthur between elements of the French Army of the Danube and the elements of the Habsburg army, commanded by Friedrich, Baron von Hotze during the War of the Second Coalition, in the French Revolutionary Wars. Because Winterthur lies near Zurich and at the junction of seven cross-roads; the army that held the town held the access to most of Switzerland and points crossing the Rhine into southern Germany. Although the forces involved were small, the ability of the Austrians to sustain an 11-hour assault against the French line, on the plateau north of Zürich, resulted in the consolidation of three Austrian forces. This led to the French defeat a few days later.

In the 19th century, Winterthur became an industrial town when companies, like Sulzer, Rieter and SLM, built large industrial plants. The Great Depression, in the 1930s, hit Winterthur extremely hard. 60% of the total employees in town worked in the machine industry. Jobs became extremely hard to find. However, with the outbreak of World War II, industry grew again in the city. 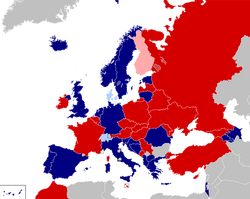 Twenty-one countries participated in the first semi-final. Andorra, Finland and San Marino also voted in this semi-final. The highlighted countries qualified for the final.

Twenty-two countries participated in the second semi-final. Denmark and Switzerland also voted in this semi-final. The highlighted countries qualified for the final.

Retrieved from "https://nvsc.fandom.com/wiki/North_Vision_Song_Contest_3?oldid=58510"
Community content is available under CC-BY-SA unless otherwise noted.