North Vision Song Contest 4, often referred as NVSC 4, was the 4th edition of North Vision Song Contest. It took place in Gothenburg, Sweden, following Malena Ernman's victory in the 3rd edition. It was the first time that Sweden hosted the contest. Sveriges Television (SVT) chose the Scandinavium as the venue for the contest and Petra Mede and Eric Saade as the hosts.

The winner of the edition was Denmark with the song "Amaranthine" sung by Danish-Swedish band Amaranthe, which scored 175 points just a 7 points-margin from the second time runner-up, France. Belgium finished on the third place followed by by Bulgaria and Slovakia in the fourth and fifth places respectively. From the big 5, only Ireland didn't enter the top 15 achieving the 22nd place.

Gothenburg is the second largest city in Sweden and the fifth largest in the Nordic countries. Situated by the Kattegat, on the west coast of Sweden, the city proper has a population of 528,014, with 549,839 in the urban area and total of 949,812 inhabitants in the metropolitan area. Gothenburg is classified as a global city by GaWC, with a ranking of Gamma−. The city was ranked as the 12th most inventive city in the world by Forbes (2013).

Gothenburg was founded by royal charter in 1621 by King Gustavus Adolphus. At the mouth of the Göta älv, the Port of Gothenburg is the largest port in the Nordic countries.

Gothenburg is home to many students, as the city includes both the University of Gothenburg and Chalmers University of Technology. Volvo was founded in Gothenburg in 1927. The city is a major centre in Sweden for sports and home to the IFK Göteborg, BK Häcken, GAIS and Örgryte IS association football teams as well as the Frölunda HC ice hockey team.

The city is known for hosting some of the largest annual events in Scandinavia. The Göteborg International Film Festival, held in January since 1979, is the leading film festival in Scandinavia with over 155,000 visitors annually. During the summer a broad variety of music festivals take place, such as Way Out West and Metaltown. Gothia Cup, held every year in Gothenburg, is in regards to the number of participants the world's largest football tournament: in 2011, a total of 35,200 players from 1567 teams and 72 nations participated.

Gothenburg
Locations of the candidate cities. The chosen location is marked in red.

So far four cities has been considered as host city of the contest. The Friends Arena, located in Stockholm, which hosts the Fantasifestivalen finals, was the first venue to join.

On July 29, The Ullevi Stadium, located in Gothenburg, joined the bidding phase. As well as, the Tele2 Arena in Stockholm and the Göransson Arena in Sandviken joined later. On July 30, Malmö Arena, located in Malmö, joined.

Finally, on August 2 applications closed and the last two arenas joined, the Scandinavium in Gothenburg and the Sparbanken Lidköping Arena in Lidköping.

On August 4, it was revealed that Gothenburg was selected as the host city of the edition with Scandinavium serving as the host venue. 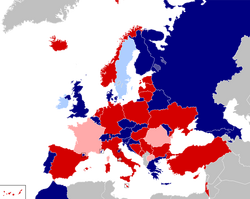 Countries could begin announcing their entries on the 29th of July. 49 nations had originally confirmed, but Merland Kademi, the Albanian representative withdrew after his song was included in one of the sneak-peeks and received poor reviews. Had Albania not withdrawn, this edition would have had the most participants, until the 7th edition. Armenia also withdrew from the contest before the submissions closed due to poor results and low interest in the nation. Both countries returned in the next edition.

Twenty-one countries participated in the first semi-final. France, FYR Macedonia and Romania also voted in this semi-final. The highlighted countries qualified for the final.

Twenty-two countries participated in the first semi-final. Ireland and Sweden voted in this semi-final. The highlighted countries qualified for the final.

North Vision Song Contest: Gothenburg 4 is the official compilation album of the 4th edition of the contest, put together by the North Broadcasting Union and was released by Universal Music Group on 28 August 2013.

The album features all 48 songs that entered in the 4th edition, including the semi-finalists that failed to qualify into the grand final. It was the first time that the NBU had produced such merchandise.

Retrieved from "https://nvsc.fandom.com/wiki/North_Vision_Song_Contest_4?oldid=53108"
Community content is available under CC-BY-SA unless otherwise noted.