North Vision Song Contest 5, often referred to as NVSC 5 was the 5th edition of the North Vision Song Contest. It took place in Aarhus, Denmark, following Amaranthe's victory in the fourth edition. It was the first time that Denmark hosted the contest. Danmarks Radio (DR) chose the Atletion Arena as the venue for the contest and Bryan Rice and Signe Molde as the hosts.

Forty-eight countries participated including Albania and Armenia who were last represented in the 3rd edition. Kazakhstan and Lebanon made their debut appearance as they were full members of the NBU. Bosnia and Herzegovina, Hungary, Iceland and Malta announced their withdrawal from the edition.

The winner of the edition was Lebanon with the song "Hafdal Ahlam" sung by Nicole Saba, which scored 173 points just a 3 points-margin with the three times in a row runner-up, France. Sweden finished on the third place followed by FYR Macedonia and Azerbaijan in the fourth and fifth places respectively. From the big 5, only France and Denmark entered the top 15 with the latter achieving the 13th place while Belgium, Bulgaria and Slovakia finished in bottom three.

Aarhus or Århus is the second-largest city in Denmark. The principal port of Denmark, Aarhus is on the east side of the peninsula of Jutland in the geographical centre of Denmark. Aarhus is the seat of the council of Aarhus municipality with 319,094 inhabitants and 256,018 (1 January 2013) in the inner urban area. According to Aarhus municipality, the "Greater Aarhus" area has a population of about 1.25 million people. The city claims the unofficial title "Capital of Jutland".

Aarhus is the main and biggest city in the East Jutland metropolitan area (Danish: Byregion Østjylland), which is a co-operation in eastern Jutland with 17 municipalities. With more than 1.2 million people living in the East Jutland metropolitan area it represents approximately 23% of the population of Denmark. Aarhus has the second-largest urban area in Denmark after Copenhagen.

The city lies roughly at the geographical centre of Denmark on the peninsula of Jutland. Forests reach from the south into the city to within a kilometre (0.6 mi) of the city centre, because the city has grown around the forest, and some forest areas are completely surrounded by the city, such as Riis Skov. The city is built mostly around the harbour, which is predominantly industrial, although a large recreational marina is situated south of it as an extension. 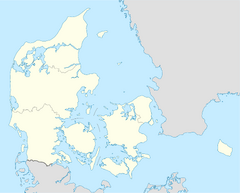 Aarhus
Locations of the candidate cities. The chosen location is marked in red.

It was rumored that the capital, Copenhagen, would not join the bidding phase. However it was revealed on 19 September 2013 that Copenhagen entered the phase with the largest venue of Denmark, the Parken Stadium. The B&W Hallerne would be the venue to be added for Copenhagen but withdrew due to the 2014 Eurovision Song Contest.

The Gigantium and the Atletion located in Aalborg and Aarhus respectively, also entered the phase on 19 September 2013. Horsens also joined the phase with the venue being the courtyard of the former Horsens State Prison but withdrew on 20 September due to the city's lack of sufficient hotel capacity.

Copenhagen placed another bid with B&W Hallerne, the venue that will host the 2014 Eurovision Song Contest. Even though it was announced that the venue would not be able to host, at the end it entered the bid. The submissions for placing bids on hosting the contest closed on 23 September 2013.

On 24 September, Aarhus was announced as the host city along with the logo and the theme of the edition. Danmarks Radio (DR) announced that the venue would have a permanent roof for the show. However it was later decided that the roof won't be permanent. The works on the arena started in mid-September and the arena was ready in early October for the rehearsals and the shows.

There were not changes on the voting in this edition; each country should to combine their jury and televoting results to produce an overall ranking from first to last place. The song which scored the highest overall rank received 12 points, while the tenth-best ranked song received 1-point. The split results were announced some weeks after the final results. However, every country had the right to present their own split results.

Official sponsors of the contest were the Danish brewing company Carlsberg, the international company Coloplast and the Danish manufacturer, seller, installer, and servicer of wind turbines Vestas.

The draw that determined the semi-final allocation was held on 5 October 2013 at the MCH Arena. Bosnia and Herzegovina was in the third pot but after its withdrawal was removed from it. The big 5 countries were first drawn to determine in which semi-final would each country vote. Belgium, Bulgaria and Slovakia were drawn to vote in the first semi-final while Denmark and France were drawn to vote in the second semi-final. The rest forty-three countries were divided into eight pots, based on their geographical place. Each time a country was drawn from the pot, its semi-final and half of the semi-final was determined.

1 Bosnia and Herzegovina withdrew a few hours before the allocation draw. 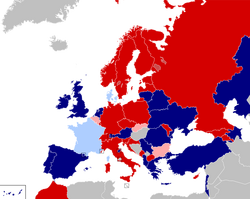 Forty-eight countries participated in the edition with Albania and Armenia returning. NBU announced that since Kazakhstan and Lebanon became members during the 4th edition, the countries could make their debut appearance already.

Hungary, Iceland and Malta announced their withdrawal shortly after the confirmations started. Bosnia and Herzegovina firstly confirmed their participation but after several discussions with DR, the country decided to withdraw. If they hadn't withdrew, Bosnia and Herzegovina would be competing in the second semi-final.

Lenka, who represented the Czech Republic in the 2nd edition but failed to qualify, returned to the contest to represent the Czech Republic, once again. Also, Sharon den Adel, the vocalist of Within Temptation, represented Luxembourg in the 4th edition with Armin van Buuren. Nicky Russell, who represented Denmark along with her band L.I.G.A, was a backing vocalist for the Danish entry in the 3rd edition. Anabela returned with her husband representing Serbia as the duo Funky G after representing Bosnia and Herzegovina in the 1st edition.

Twenty-two countries participated in the first semi-final. Belgium, Bulgaria and Slovakia also voted in this semi-final. The highlighted countries qualified for the final.

Twenty-one countries participated in the second semi-final. Denmark and France also voted in this semi-final. The highlighted countries qualified for the final.

Twenty-five countries competed in the final, with all forty-eight participating countries eligible to vote.

On 27 September, the winner of the Finnish selection was announced. However, the winner wasn't eligible to participate in the contest as the singer was only 14 years old. It was later decided by YLE that Jenni Vartiainen, who finished fourth in the selection, would represent the country with the song "En haluu kuolla tänä yönä".

RAI Uno made a fake statement, that they would withdraw, hours after the deadline, passed because of the bad reviews from the third sneak peek. However, the story turned out to be a hoax, as RAI Uno later stated. RAI Uno had shown, that the media would go wild, if any country would withdraw from North Vision.

After the winning song of the national selection was confirmed, RTL has been criticized and received mixed feedback from the Luxembourger fans. It was then rumored that the song would be changed but after a meeting of the RTL heads, it was decided to keep the song in the competition.

North Vision Song Contest: Aarhus 5 is the official compilation album of the 5th edition of the contest, put together by the North Broadcasting Union and was released by Universal Music Group on 17 October 2013.

The album features all 48 songs that entered in the 5th edition, including the semi-finalists that failed to qualify into the grand final.