North Vision Song Contest 6, often referred to as NVSC 6 will be the 6th edition of the North Vision Song Contest. It took place in Lebanon following Nicole Saba's victory in the fifth edition. It was the first time that Lebanon hosted the contest. Lebanon Broadcasting Corporation Europe (LBC) chosen to build a new arena for the edition, the Arena Vinvoci located in Beirut.

Forty-eight countries participated including Bosnia and Herzegovina, Hungary, Iceland and Malta who were last represented in the fourth edition. The Czech Republic, Turkey, Armenia and Kazakhstan announced their withdrawal from the fifth edition with the latter two being forced to do so.

The winner of the sixth edition was the United Kingdom represented by Chlöe Howl and the song "Rumour" which scored 175 points. Lithuania achieved their best result so far with the second place, 15 points behind the winner. The host, Lebanon, finished in the twenty-fourth place. The only big 5 members that achieved a top 10 place were Azerbaijan and FYR Macedonia getting the tenth and fifth place respectively. Sweden achieved their worst result so far, the seventeenth place while France was after three consecutive second places for first time out of the top 10 by getting the fourteenth place.

Beirut is the capital and largest city of Lebanon. As there has been no recent population census, the exact population is unknown; estimates in 2007 ranged from slightly more than 1 million to slightly less than 2 million. Located on a peninsula at the midpoint of Lebanon's Mediterranean coast, it serves as the country's largest and main seaport. The Beirut metropolitan area consists of the city and its suburbs. The first mention of this metropolis is found in the ancient Egyptian Tell el Amarna letters, dating from the 15th century BC. The city has been inhabited continuously since then.

Beirut is Lebanon's seat of government and plays a central role in the Lebanese economy, with many banks and corporations based in its Central District, Hamra Street, Rue Verdun and Ashrafieh. The city is the focal point of the region's cultural life, renowned for its press, theatres, cultural activities and nightlife. After the destructive Lebanese Civil War, Beirut underwent major reconstruction, and the redesigned historic city centre, marina, pubs and nightlife districts have once again made it a tourist attraction. 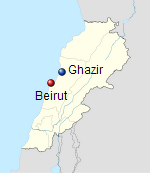 Locations of the candidate cities.

A bidding phase kicked off just one day after the results of the fifth edition. The Old Opera House in Beirut was the first venue to enter the phase. Surprisingly, along with the Old Opera House, Nicole Saba's residence backyard entered the phase with LBC saying that the location would be perfect since they are planning to make this edition original and different from the past editions.

On 17 November 2013, the NBU announced that LBC is considering bulding a new venue just for the contest that would be used for sports afterwards the contest. The same day, two trucks of a well-known transporting company, were parked in front of Nicole's house meaning that the residence was most likely selected as the venue for the contest. However, no official announcement was made by LBC yet. One day later, on 18 November 2013, two more venues joined the phase; the Ghazir Club Court located in Ghazir and the Chamoun Stadium located in Beirut.

On 19 November 2013, LBC revealed that they have started the plans for building a new arena. The new arena that will be called Arena Vinvoci, will be the venue for the sixth edition.

The draw that determined the semi-final allocation was held on 8 December 2013 at the facilities of the NBU in Sweden because the host country did not have a place to host it. The big 5 countries were first drawn to determine in which semi-final would each country vote. France, FYR Macedonia and Sweden were drawn to vote in the first semi-final while Azerbaijan and Lebanon were drawn to vote in the second semi-final. The rest forty-three countries were divided into eight pots, based on their geographical place. Each time a country was drawn from the pot, its semi-final and half of the semi-final was determined.

The seven pots were the following:

The draw that determined the running order of the edition took place on 10 December 2013 in Beirut. Two countries from each semi-final and a big 5 country received a wildcard and could select their starting position at their half (first or second). Greece, Luxembourg, Moldova and the United Kingdom got the wildcards of the semi-finals while Azerbaijan got the wildcard of the big 5. The running order draw for the semi-final qualifiers took place after the results of each semi-final with each of the qualifiers drawing their starting position. 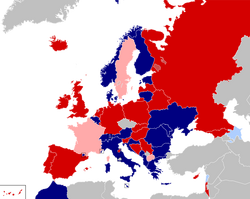 Maja Keuc represented Slovenia for second time in a row. The Slovenian broadcaster, RTVSLO, internally selected the singer even though she failed to qualify in the fifth edition. Laura Pausini, who represented San Marino in the fourth edition, returned to the contest to represent Italy along with Kylie Minogue.

The Romanian representative, Inna, had previously represented the country in the third edition. Inna had won the selection with "Be My Lover" but was later disqualified. However, after some discussions it was decided that Inna will still be the Romanian entry with different song, her latest single, "In Your Eyes".

The Bulgarian representative in the fourth edition, Bogomil, was selected to replace Nevana after it was found out that her song was a cover. The replacement was made just a few hours before the second semi-final.

Twenty-one countries participated in the first semi-final. France, Macedonia and Sweden also voted in this semi-final. The highlighted countries qualified for the final.

Twenty-two countries participated in the second semi-final. Azerbaijan and Lebanon also voted in this semi-final. The highlighted countries qualified for the final.

On 21 November, the Armenian broadcaster revealed the winner and the runner-up of the selection (the previous places were revealed the days before) with Varsa and "Le Rêve Brisé" being the winner. However, one of the juries complained and said that his votes were not right and therefore the winner would be the runner-up, "Hay Hay" by Inga & Anush. After the NBU found out that the Armenian broadcaster tried to cheat, the country was banned from the sixth edition, received a strike and paid a fine. Additionally, Norway was elected as the North Vision in Concert 6 host instead of Armenia as Norway came second in the poll. ARMTV later revealed that despite being banned from the sixth edition, the contest would still be televised in Armenia.

On 30 December 2013, it was reported that the selected entry for Bulgaria "Povey Vetre" by Nevena Tsoneva was a cover. Therefore, the entry was not allowed to enter the competition and had to be changed. BNT decided to send their representative in the fifth edition Bogomil instead, who was originally planned to be a member of the Bulgarian jury.

Kazakhstan was supposed to appear in the sixth edition of the contest with its broadcaster KTK. A second edition of Qazaqstan An was ongoing, however the results were never published due to the fact that KTK services were withdrawan from the NBU and therefore the country wasn't allowed to take part in the contest.

The televoting lines of the Latvian national selection were closed too early due an error made by the national broadcaster LTV. All televoters have been given their money back and the voting lines were re-opened.

Inna originally won the Romanian national selection with "Be My Lover", but later was forced to withdraw due the song being a cover. Therefore TVR asked the runner-up What's Up featuring Andra to represent Romania with "K La Meteo". However, they rejected to participate, so TVR asked Inna to compete with a different song, "In Your Eyes" became chosen.

Retrieved from "https://nvsc.fandom.com/wiki/North_Vision_Song_Contest_6?oldid=67113"
Community content is available under CC-BY-SA unless otherwise noted.