North Vision Song Contest 7, often referred to as NVSC 7 was the 7th edition of the North Vision Song Contest. It was held in the United Kingdom following Chlöe Howl's victory in the sixth edition. It was the first time that the United Kingdom hosted the contest. The British Broadcasting Corporation (BBC) chose Liverpool and the Echo Arena to host the contest. For the first time, the contest had four different hosts; Holly Willoughby hosted the first semi-final, Emma Willis hosted the second semi-final, Fearne Cotton hosted the final show and the winner of the last edition, Chlöe Howl hosted the final results. As a surprise, the BBC announced that there was also be a male host for the final. Graham Norton was set to be the fifth host overall.

Fifty-one countries participated in the contest with Armenia, Czech Republic, Turkey and Kazakhstan returning. On 16 January, Luxembourg's withdrawal had been announced.

The winner of the edition was Bosnia and Herzegovina with the song "Carry On" performed by Maja Nurkić, which scored 182 points, sixteen points over the runner-up. This marked the first victory for a Balkan country. The Netherlands finished on the third place while the three times-runner up France finished on the fourth place. Two of the big 5 members, the United Kingdom and Ukraine finished in the top 5 indicating that they would be a big 5 member in the following edition while Hungary was the lowest ranked member of the big 5 with the 18th place.

Liverpool is a city and metropolitan borough of Merseyside, England, United Kingdom along the eastern side of the Mersey Estuary. It was founded as a borough in 1207 and was granted city status in 1880. In 2011 the population administered by Liverpool City Council was 466,415 and is at the centre of a wider urban area, the Liverpool City Region.

Historically, Liverpool was a part of Lancashire. The city's urbanisation and expansion were largely brought about by the city's status as a major port. By the 18th century, trade from the West Indies, Ireland and mainland Europe, coupled with close links with the Atlantic slave trade, furthered the economic expansion of Liverpool. Liverpool is also well known for its inventions and innovations, particularly in terms of infrastructure, transportation, general construction, and in the fields of public health and social reform. Railways, ferries and the skyscraper were all pioneered in the city, together with the first societies for animal and child protection, the first schools for the blind, for working-men, and for girls. Liverpool was the port of registry of the ocean liner, the RMS Titanic, and the words Titanic, Liverpool could be seen on the stern of the ship.

Labelled the World Capital City of Pop by Guinness World Records, artists of Liverpool origin have produced more number one singles than any other. The popularity of The Beatles, Billy Fury, Gerry and the Pacemakers, and the other groups from the Merseybeat era, and later bands such as Echo & the Bunnymen and Frankie Goes to Hollywood, contributes to Liverpool's status as a tourist destination; tourism forms a significant part of the city's modern economy. The city celebrated its 800th anniversary in 2007, and it held the European Capital of Culture title together with Stavanger, Norway, in 2008.

Liverpool is also well known for its strong sporting identity. The city is home of two Premier League football clubs, Liverpool F.C. and Everton F.C.. Matches between the two clubs are known as the Merseyside derby. The world-famous Grand National also takes places annually at Aintree Racecourse on the outskirts of the city. 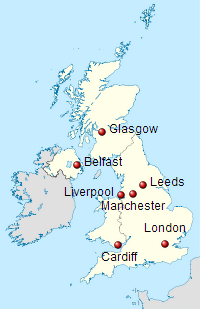 Locations of the candidate cities.

The bidding phase submissions opened on 22 January. On 23 January, London and Manchester were the first cities to join the phase with The O₂ Arena and the Manchester Arena respectively.

After applying to enter as an independent nation, Wales submitted Millennium Stadium, located in Cardiff, to host the seventh edition. On 26 January, two more cities joined the phase; Glasgow with the Glasgow Celtic Park and Belfast with the Belfast Odyssey Arena. The same day, Leeds and Liverpool joined the phase with the Leeds Festival Grounds and the Echo Arena respectively.

Just one day before BBC would decide the host city, Llanfairpwllgwyngyllgogerychwyrndrobwllllantysiliogogogoch, a village located in Wales, decided to enter the phase. However, a venue was never revealed.

On 28 January, BBC announced that Liverpool will be the host city of the seventh edition as it was tagged as the best one for such a competition. The Echo Arena has a capacity of more than 12,000, though it may be decreased due to the stage and staff occupation. 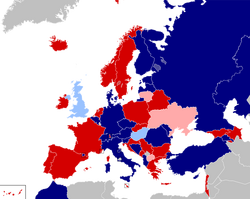 Twenty-three countries participated in the first semi-final. Lithuania, FYR Macedonia and Ukraine also voted in this semi-final. The highlighted countries qualified for the final.

Twenty-five countries participated in the final, with all fifty-one participating countries eligible to vote.

The After-show awards were renewed and renamed to North Vision Awards for the seventh edition. There were twelve categories with five nominees in each. The voters could vote through polls in the website.

On 22 January, it was announced that Spain would send "Love is Dead" by Ruth Lorenzo. However, as the song was already participating in the Andorran national selection, Spain was forced to change their entry for the edition.

Countries that are active members of the North Broadcasting Union (NBU), are also eligible to participate in the North Vision Song Contest. As in every edition, an invitation to all the members had been sent in order to confirm whether they will participate or not. Fifty-one countries confirmed their participation in the edition. The following list of countries declined stating their reasons as shown below.

Retrieved from "https://nvsc.fandom.com/wiki/North_Vision_Song_Contest_7?oldid=63925"
Community content is available under CC-BY-SA unless otherwise noted.