North Vision Song Contest 8, often referred to as NVSC 8 was the 8th edition of the North Vision Song Contest. It was held in Bosnia and Herzegovina following Maja Nurkić's victory in the seventh edition. It was the first time that Bosnia and Herzegovina hosted the contest and also the first time that the contest took place in a Balkan country. The Radio and Television of Bosnia-Herzegovina (BHRT) chose the Olympic Hall Juan Antonio Samaranch to host the contest while Maya Sar, Vukašin Brajić and Marija Šestić were the presenters for all the three events.

Fifty-one countries participated in the edition with Algeria and Tunisia making their debut appearance. Luxembourg returned to the contest after the one-edition break while Cyprus and Slovenia withdrew from the edition, both due to financial issues.

The winner of the edition was Norway with the song "Younger" by Julie Bergan with 187 points, 14 points ahead the runner-up. It was the first time that the country won the contest and also their first top 5 achievement. Ukraine came in second while Sweden finished third for the third time. Liechtenstein and Greece also achieved their first top 5 results after getting fourth and fifth respectively.

Sarajevo is the capital and largest city of Bosnia and Herzegovina, with an estimated population of 291,422. Sarajevo metropolitan area, including Sarajevo, East Sarajevo and surrounding municipalities, is home to 608,354 inhabitants. Moreover, it is also the capital of the Federation of Bosnia and Herzegovina entity, the capital of the Republic of Srpska entity, and the center of the Sarajevo Canton. Nestled within the greater Sarajevo valley of Bosnia, it is surrounded by the Dinaric Alps and situated along the Miljacka River in the heart of Southeastern Europe and the Balkans.

Sarajevo is the leading political, social and cultural center of Bosnia and Herzegovina, and its region-wide influence in politics, education, entertainment, media, fashion, science, and the arts contribute to its status as Bosnia and Herzegovina's biggest and most important economic center.

Sarajevo has been undergoing post-war reconstruction, and is the fastest growing city in Bosnia and Herzegovina. The travel guide series, Lonely Planet, has named Sarajevo as the 43rd best city in the world, and in December 2009 listed Sarajevo as one of the top ten cities to visit in 2010. In 2011, Sarajevo was nominated to be the European Capital of Culture in 2014 and will be hosting the European Youth Olympic Festival in 2017.

The bidding phase kicked off on 16 April with one venue joining the race for hosting the contest; the Olympic Hall Juan Antonio Samaranch located in the capital city of the country, Sarajevo. The arena has place for up to 20,000 spectators at once. Named in honor of Juan Antonio Samaranch in 2010 after his death, it was used for various sporting events at the 1984 Winter Olympics.

On 19 April 2014, Asim Ferhatović Hase Stadium, also located in Sarajevo, joined the phase as the second venue. The stadium offers space for up to 38,000 viewers. In 1984, the stadium hosted the opening ceremony of the Winter Olympics. Currently, it is home to football club FK Sarajevo and the Bosnia and Herzegovina national football team.

On 20 April 2014, the NBU announced that the Olympic Hall Juan Antonio Saramanch would be the host venue for the contest. The arena will be enlarged and half of the venue's parking lot will host three tents: one for the press conference, a bar and fast food and a big Northvision Fan Store including flags and souvenirs which can be brought inside the hall. The green rooms are going to be located right behind the stage area and double-decked grandstands will be built inside the huge hall. Some 18.000 people are probably expected to be guests during the live shows.

The draw that determined the semi-final allocation was held on 9 May 2014 in Sarajevo. As the pre-qualification round would start after the draw, the spots for the pre-qualification round qualifiers were drawn first. The big 5 countries were first drawn to determine in which semi-final would each country vote. Bosnia and Herzegovina and the United Kingdom were drawn to vote in the first semi-final while France, the Netherlands and Ukraine were drawn to vote in the second semi-final. The rest forty countries were divided into eight pots, based on their geographical place. Each time a country was drawn from the pot, its semi-final and half of the semi-final was determined. 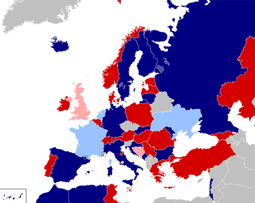 Fifty-one countries participated in the eighth edition with five countries being eliminated in the pre-qualifying round making a total of forty-six countries, semi-finalists and big 5. Algeria and Tunisia making their debut appearance while Luxembourg returned after the one edition-break. Cyprus, FYR Macedonia and Slovenia announced their withdrawal from the edition.

Nine countries participated in the first pre-qualification round. Andorra, Greece, Monaco, and Montenegro qualifed to the semi-finals, while Albania, Armenia, Azerbaijan, Belarus and the Czech Republic were eliminated.

Twenty-one countries participated in the first semi-final. Bosnia and Herzegovina and the United Kingdom also voted in this semi-final. The ten highlighted countries qualified for the final.

Twenty countries participated in the second semi-final. France, the Netherlands and Ukraine also voted in this semi-final. The highlighted countries qualified for the final.

Twenty-five countries participated in the final, with all forty-six participating countries eligible to vote.

The first OGAN Second Chance Contest took place for this edition and was hosted by OGAN Sweden. The OGAN clubs of each country could submit one of their national selection entries to compete in the contest with some rules applying for the entries. Norway won the contest with Adelén and her song "Always On My Mind".

On 15 April 2014, it was announced that Claudia Schanza would represent the country with "Ha Ha". However, it was later announced that she had been rejected by the Liechtensteinerin broadcaster.

On 17 April 2014, Montenegro revealed their entry for the edition. However, the NBU Council declined the entry, as the singers weren't Montenegrin themselves.

Participation of artists in multiple selections

It was revealed by the NBU Council during the voting period of the second semi-final that the following countries had very suspicious voting patterns, and it was decided that they would all be disqualified from the next edition and that their votes in the second semi-final (bar Georgia which participated in the first semi-final) and the final would be done by four selected associate broadcasters:

Countries that are active members of the North Broadcasting Union (NBU), are also eligible to participate in the North Vision Song Contest. As in every edition, an invitation to all the members had been sent in order to confirm whether they will participate or not. Fifty-one countries confirmed their participation in the edition. The following list of countries declined stating their reasons as shown below.