North Vision Song Contest 9, often referred to as NVSC 9 was the 9th edition of the North Vision Song Contest. It was held in Norway following Julie Bergan's victory in the eighth edition. It was the first time that Norway hosted the competition. However, it is the fourth time that a Nordic country hosts an edition following Iceland, Sweden and Denmark. Norwegian Broadcasting Corporation (NRK) chose the capital city to host the competition and the Telenor Arena. Nadia Hasnaoui, Erik Solbakken and Haddy N'jie were chosen by NRK as the presenters for the events.

Forty-five countries participated in the edition which was the lowest number of participants since the second edition. Armenia, Azerbaijan, Belgium and San Marino announced their withdrawal from the contest mainly due to the poor results of the countries. Croatia, Georgia, Montenegro and Morocco were forced the withdraw for one edition after the NBU found out their cheating series since their debut.

The winner of the edition was once again Norway, making it the first country to win the competition twice and also the first country to win the edition they were hosting. The winning song was "Feathers" by Alida and managed to gather 198 points, just 2 points less than the most scored winner, "The Man I Need". The United Kingdom finished second for second time while Ukraine managed to get in the top 5 for third time in a row by achieving the third place. The Netherlands finished in fourth place making it their second top 5 result while Russia achieved their best result with the fifth place.

Oslo is the capital of Norway and most populous city in Norway. Oslo constitutes a county and a municipality.

Oslo is the economic and governmental center of Norway. The city is also a hub of Norwegian trade, banking, industry and shipping. It is an important centre for maritime industries and maritime trade in Europe. The city is home to many companies within the maritime sector, some of which are among the world's largest shipping companies, shipbrokers and maritime insurance brokers. Oslo is a pilot city of the Council of Europe and the European Commission intercultural cities programme.

Oslo is considered a global city and ranked "Beta World City" in studies performed by the Globalization and World Cities Study Group and Network in 2008. It was ranked number one in terms of quality of life among European large cities in the European Cities of the Future 2012 report by fDi Magazine. A survey conducted by ECA International in 2011 placed Oslo as the second most expensive city in the world for living expenses after Tokyo. In 2013 Oslo tied with the Australian city of Melbourne as the fourth most expensive city in the world, according to the Economist Intelligence Unit (EIU)'s Worldwide Cost of Living study.

As of January 2014 the city of Oslo has a population of 634,000. The Metropolitan area of Oslo has a population of 1,502,604, of whom 951,581 live in the contiguous conurbation. The population currently increases at record rates, making it the fastest growing major city in Europe. This growth stems for the most part from immigration and high birth rates among immigrants, but also from intra-national migration. The immigrant population in the city is growing somewhat faster than the Norwegian population, and in the city proper is now more than 25%.

Aerial view with the arena

NRK, the Norwegian broadcaster, chose Oslo to host the contest without having a bidding phase making the edition the first to not have one since the third edition. The contest was hosted in the Telenor Arena, which served as the host venue for the 2010 Eurovision Song Contest.

The selected host city and venue were announced by the broadcaster on 9 June 2014, just a few weeks after the victory of the country in the eighth edition. Vaios Korvsen, the head of delegation reportedly said: "We are very sure that Oslo can host this event. Such a big show as North Vision has to be carried out professionaly in our eyes. Oslo was the only city we were 100% sure about being the perfect option for this. We immediately requested the Telenor Arena to make sure that a large amount of around 25.000 North Fans can attend the spectacular shows."

Early versions of the logo

The logo for the ninth North Vision Song Contest has been created by Jessica Weaver. The Norwegian broadcaster expressed its desire in a logo that resembles unity and the joy of being together. The idea of a beehive came up where each part if connected with at least two other parts to make up a strong structure. Additional to the beehive, colors for each of the hexagons have been added to create a feeling of diversity within the unity. The whole design of the contest based on individual colours to keep up the theme within the show. The original slogan for the contest was "Connection". After Nokia has been announced as official sponsor, the slogan was changed to "Connecting People" as requested by the company. 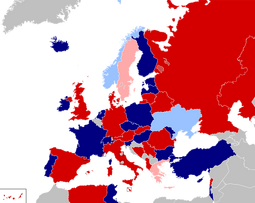 Forty-five countries participated in the ninth edition with Cyprus and Slovenia returning to the contest after the one-edition break. Armenia, Azerbaijan, Belgium and San Marino announced their withdrawals from the contest.

Croatia, Georgia, Montenegro and Morocco were forced to withdraw after they were disqualified for one edition by the NBU for cheating. FYR Macedonia was also forced to withdraw for a second edition in a row due to no announcement being made by the broadcaster about their participation. The Faroe Islands would debut in the edition but the broadcaster of the country could not find sponsors to fund their participation. However, it is expected that they will debut in the tenth edition.

Twenty countries participated in the first semi-final. Sweden and Ukraine also voted in this semi-final. The highlighted countries qualified for the final.

Twenty countries participated in the second semi-final. Greece, Liechtenstein and Norway also voted in this semi-final. The highlighted countries qualified for the final.

Twenty-five countries participated in the final, with all forty-five participating countries eligible to vote.

The second OGAN Second Chance Contest took place for this edition and was hosted by OGAN Norway. The OGAN clubs of each country could submit one of their national selection entries to compete in the contest with some rules applying for the entries. Sweden won the contest with Manda and her song "Criminals".

YLE originally had chosen another song for their representative Jenni Vartiainen, but later have changed it due the song having participated in a previous national selection of Estonia.

After LBC had officially chosen their song for the edition, the NBU requested a song change, as the same song (in a different version) had also been chosen for Malta in the same edition. LBC decided to send the runner-up of their national selection; Haifa Wehbe with her song "MJK (Heartbeats Remix)".

The actual winner The Dirty Youth, that are originally from the United Kingdom, have been disqualified due not being accepted by the NBU council to participate in the national selection as a foreign act. The runner-up of the selection was selected instead.

Adelén was selected by TVE to represent Spain but was immediately rejected due the song being a sample of another song and the singer not having enough roots to be internally selected for Spain.

Countries that are active members of the North Broadcasting Union (NBU), are also eligible to participate in the North Vision Song Contest. As in every edition, an invitation to all the members had been sent in order to confirm whether they will participate or not. Forty-five countries confirmed their participation in the edition. The following list of countries declined stating their reasons as shown below.

Retrieved from "https://nvsc.fandom.com/wiki/North_Vision_Song_Contest_9?oldid=58514"
Community content is available under CC-BY-SA unless otherwise noted.